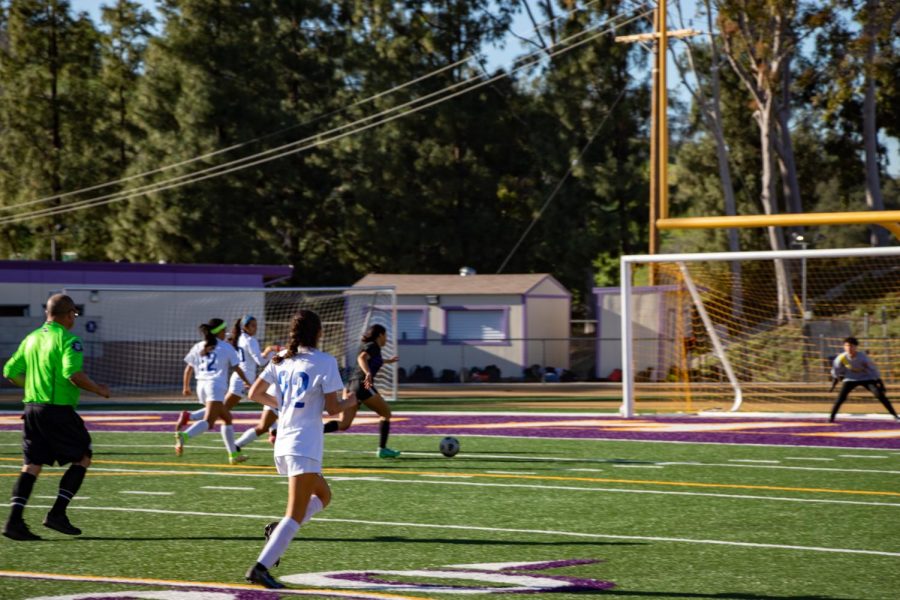 After an interrupted win streak, the Diamond Bar High School girls soccer team pushed towards the end of the season as co-champions of the Hacienda League with South Hills High.

Up until their first game against South Hills High School, the Lady Brahmas were  undefeated with a league score of 4-0. Despite their exceptional win rate, the stamina of the Huskies and a lack of communication between the Brahmas led to a loss of 5-1.

“Our biggest weakness is our communication on the field; just making sure we’re communicating to each other properly and communicating those roles to each other,” head coach Matt Franco said. “That’s been a problem all year, mostly because it’s not the same line-up and we’ve been missing kids on and off throughout the year.”

While in-game communication is still a work in progress, the girls were very supportive of each other throughout the games. What’s more, the girls have continued to work on their strong offensive plays on the field.

“For the most part, these girls have been encouraging each other whether they’re playing or sitting on the bench, trying to make sure that they’re staying focused out there,” Franco said.

According to Franco, the nine seniors on the team have been the most supportive towards the newer varsity members, helping to set a positive team atmosphere.

“We have very skilled players, and they’re very versatile. If something is not working, I’m able to switch things around and they’re able to perform better sometimes based on those match-ups,” Franco said.

It’s these skills that the girls carried into their come-back game against South Hills on Tuesday, February 7. Senior Isabella Montelongo made a goal with support from senior Alexis Fuller adding to three points and tying with South Hills seniors Ruby Landeros and Sarah Venegas thus tying 1-1 with South Hills High.