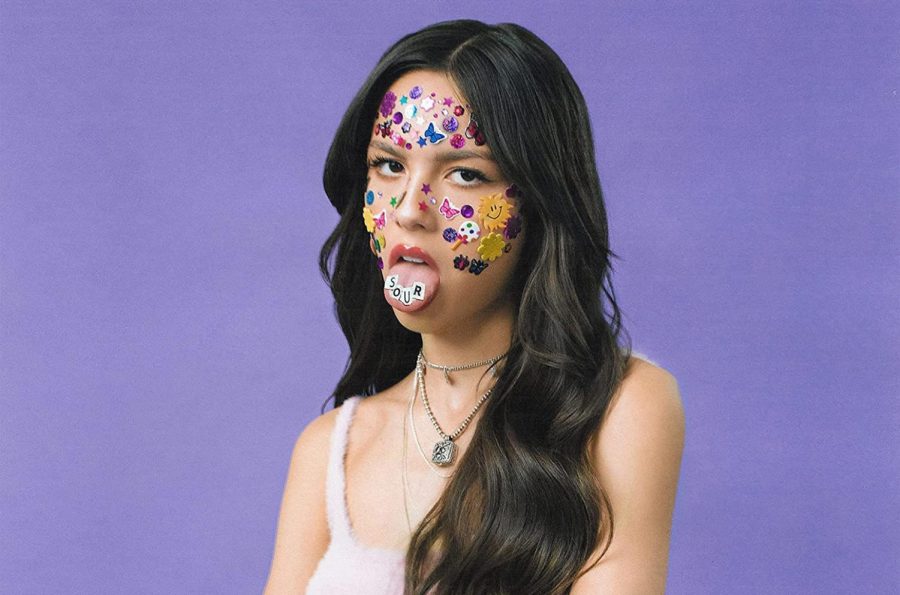 In January, singer-songwriter-actress Olivia Rodrigo premiered her debut single “drivers license,” skyrocketing the singer’s popularity, seemingly out of nowhere. The former Disney star has since gone on to release her highly-anticipated first album “Sour,” taking impressive first few steps into the music industry.

“Sour,” which came out May 21, is a somewhat chaotic collection of breakup songs, all told from Rodrigo’s perspective. Many of the songs carry similarities to her debut single, which is also included in the album; they follow roughly the same theme, failed romance and the aftermath of heartbreak.

Although the theme of each song takes the same general direction, their paths diverge when it comes to instrumentation and overall feel. The way the songs are organized, juxtaposing emotional and mournful ballads against guitars and distortion filters, actually adds to the individuality of the album despite the seeming unorthodoxy. Its inconsistency is inelegant by design, helping to emphasize the authenticity of the lyrics, revoking the image of a teenager venting their frustrations.

Many of the songs in “Sour” take inspiration from Taylor Swift’s emotionally-fueled songs. Tracks like “deja vu” are more obvious examples of this, with Rodrigo even saying that the shouty bridge in the song was inspired by Swift’s “Cruel Summer.” Furthermore, Rodrigo even received Swift’s permission to use her underlying composition in “1 Step Forward, 3 Steps Back,” earning her co-writing credits.

Despite the album being filled with heartbreak-themed songs, Rodrigo does make sure to add variety. Punk songs like “Good 4 U” help to change up the pace of the album by adding a contrast with bitter lyrics like, “You bought a new car and your career’s really takin’ off. It’s like we never even happened baby.”

The album is by no means perfect, though. Having done such an amazing job on “drivers license,” Rodrigo had created great expectations for her future work, and some songs, like “traitor,” with its forgettable, flat melody, just don’t measure up.

In this album, Rodrigo tended to focus on select plot points, such as the success of her unnamed ex or how long they took to move on, which dulls the impact of meaningful songs like “hope ur okay.” After all of the heartbreak and revenge, “hope ur okay” almost seems like an insincere last-minute effort to find a new perspective and portray maturity; though after all, she is still just 18.

Other than these relatively minor flaws and thematic shortcomings, the story that Rodrigo tells through “Sour” is still very meaningful and pleasing to the ear. The overwhelmingly positive reception of “drivers license” and many of Rodrigo’s other songs proves that her formula of admitting her own flaws and embracing the mess is a recipe for success.