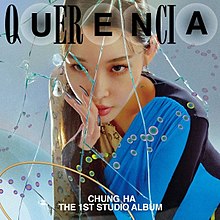 K-pop phenomenon Chung Ha might have delayed the release of her debut album to Feb. 15, but “Querencia” was well worth the wait, showing a new side to Chung Ha that’s anything but basic. Taking inspiration from every style of pop music, she seamlessly fuses together mainstream American pop with K-pop and Latin music, even weaving in hints of R&B.

Starting her career as a member of girl group IOI, Chung Ha went solo in 2017 and built her way up to become one of the top female solo artists in Korea. And, upon my first listen to “Querencia,” it’s clear why Chung Ha holds that title.

Her album is divided into four chapters, each one demonstrating a different theme of Chung Ha’s artistry—Noble, Savage, Unknown and Pleasure. Despite the dramatically different mood in each, the common thread tying the chapters together is Chung Ha’s angelic voice, making each of the 21 songs a standout piece.

The album opens with “Bicycle,” a dance-pop track featuring English, Spanish and Korean lyrics. Bold and filled with attitude, the lyrics, vocals and backing track are in such flawless tandem with each other that it makes “Bicycle” the best track on the album. What enhances this song even further is the creative visuals and choreography of the music video. An essential part of all K-pop songs, the music video took the song to the next level, showing off how much Chung Ha has grown artistically.

Chung Ha continues the Noble chapter with stand-outs “Masquerade” and “Flying on Faith.” The former is one of the catchiest tracks on the album, fusing the vibrance of K-pop with Latin Pop—a combination heightened by Chung Ha’s vocals. The latter, sung entirely in English, returns to an early-2000s style with guitar and EDM backing.

Savage shows a side of Chung Ha that’s more risque, embracing hip-hop and K-Pop in an interesting combination. “Stay Tonight” and “Dream of You” start out this chapter, which was expected as both were released prior to the album. The one surprise favorite, however, is “Chill,” a simple yet intriguing pop song. It starts out like any typical K-pop track with a distorted intro and light backing vocals before growing into a full-blown pop song. As basic as the backing track is, Chung Ha’s impressive range and artistic additions made it a song worth a second listen.

The third chapter, Unknown, is filled with collaborations, primarily with rappers. Songs like “Demente,” featuring Latin rapper Guaynaa, and “Play,” featuring South Korean rapper Changmo, were done with a combination of rapping, vocals and a supporting track of various musical styles ranging from contemporary R&B to rap.

Chung Ha departs from the upbeat vibe of her other chapters in Pleasures, rounding out the album with the chill sounds of Korean R&B. As relaxing as “All Night Long” or sweet “Come N Goes” was, “Everybody Has” was one of the top songs of this chapter, if not the entire album. A ballad holding hints of electronic music and piano, Chung Ha’s full range comes out, demonstrating the power of her voice.

Between the vocals and interesting mix of styles, “Querencia” proves how much of a musical powerhouse Chung Ha truly is, transcending the boundaries of K-pop and creating an unfiltered version of herself.