Stream it or Skip it: Wandavision 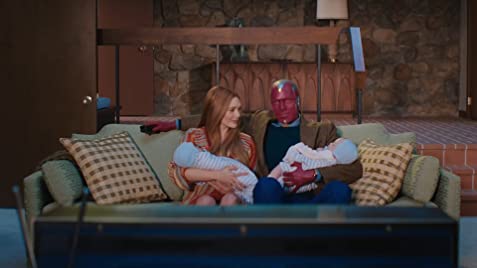 Marvel Studios and Disney+’s first collaboration, “Wandavision,” unable to capitalize on its unique approach to character development, fails to stand out from other Marvel’s television series.

The series takes place in a reality where Vision (Paul Bettany) was never killed by Thanos and lives with his romantic partner Wanda Maximoff (Elizabeth Olsen) in the idyllic suburban town of Westview, New Jersey.

For those that don’t remember, Vision couldn’t be revived during the events of “Avengers: Endgame” due to him dying before Thanos’ snap halved the galaxy’s population, so for the show to start with his return is an intriguing premise to begin with. What makes the beginning more interesting is the idea that the two star in this show without any memory of the events that took place previously in the MCU.

Their realization that their lives are falsified comes after the two are asked about their past before moving to Westview by neighbors. Disappointingly, this reveal takes place during the pilot, while the rest of the show seems more concerned with its excessive references to classic TV sitcoms.

The writing team’s appreciation for and references to nostalgic shows such as “The Brady Bunch” are made obnoxiously apparent throughout the series, to the point that every minute detail comes off as some sort of Easter egg. While lead actors Olsen and Bettany, along with the supporting cast, are capable of creating relaxed scenarios filled with humor, it’s a shame to see them practically sidelined by the allusion-defined show.

Another glaring problem is the show’s overreliance on repetitive gags. For example, Vision’s incompetence at living a normal human life is a running joke throughout the series that quickly begins to feel stale. It’s difficult to overlook the slow progression of the story as every episode becomes a different vehicle for the same, trite joke.

With no narrative context as to why the two are seemingly stuck in a 50s sitcom eight episodes into the nine-episode series, it’s fair to assume that a large portion of the audience would be confused at such a spontaneous choice. Regardless, the setting is a refreshing change from the action-dominated Marvel Universe. The couple are allowed to experience romance instead of being locked into the gritty, battle-heavy universe of “Avengers.”

For those that are already invested in Wanda and Vision’s overarching story, it may be worth it to continue following the show. But everyone who’s new to the Marvel Cinematic Universe and looking for a new show to get into it, they’d be better off waiting to hear if the show ends in a concrete manner. Because as it stands, the general trend of the series has created many unanswered questions and may leave viewers confused and unsatisfied.