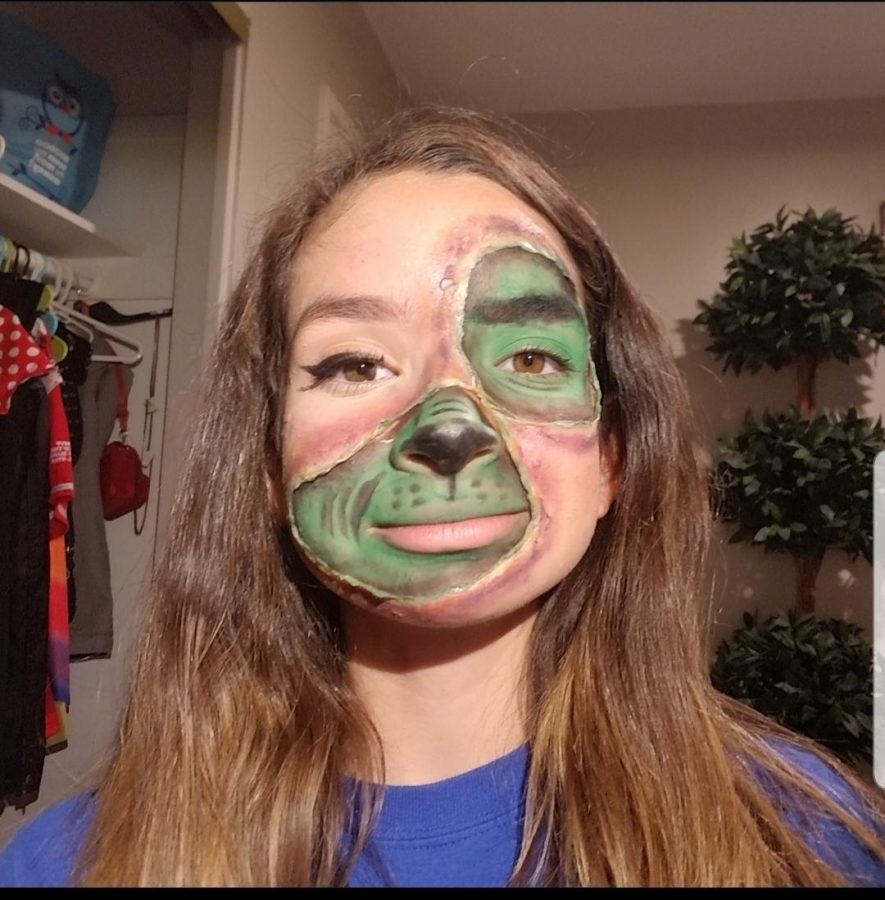 When most people think of makeup, they see it as a way to enhance a person’s beauty or natural features. However, Diamond Bar High School sophomore Kylee Sanchez has found an untraditional use for these products by practicing SFX makeup.

Special effects makeup is the use of cosmetics to transform one’s appearance, rather than merely enhance it. This style of makeup boasts a wide range of creative possibilities: a horrific monster, a fictional character, or grotesque injuries.

“I’ve always loved makeup and horror so I found SFX makeup, which can combine the two,” Sanchez said. “I do mostly gory looks but I’m trying to expand into more fantasy characters.”

In order to achieve her desired look, Sanchez needs more than the usual makeup tools. Liquid latex, scar wax, fake blood, and a variety of different colored face paints are all necessary to create a realistic style. There are also aspects of certain looks that require her to create prosthetic facepieces, which she crafts out of cotton balls and liquid latex.

Each look starts with an idea that Sanchez writes down in her notes. She then gathers all the necessary supplies for the look and begins to craft prosthetic features or uses makeup to create an illusion on her skin. According to Sanchez, she prefers not to have to use tutorials, but even when she does she puts her own spin on them.

“Most of the looks that I do almost always start with liquid latex,” Sanchez said. “I let it dry and then I apply color, whether it’s fake bruising or in fantasy looks, like the Grinch, I’ll find or make the closest color possible. Then I put on fake blood and take pictures.”

Although Sanchez creates both gory and fantasy looks, she prefers to use SFX makeup for horror looks because it’s easier to hide her mistakes when she does gore. One of her favorite looks was recreating the makeup from the horror movie, “Smiley.”

On average, it can take Sanchez about an hour to complete a look. However, if it is her first attempt at a certain style it can take up to three hours. The longest she has spent on one look is five hours, a record she set when she made herself into Waluigi (from the Mario franchise), which required many separate pieces that she had to construct and apply.

“Looks take a long time including getting ready, doing the makeup, taking it off, and cleaning up after,” Sanchez said. “I also go through materials really quickly depending on how complicated the look is, but I try to do [a look] at least a few times a month so I don’t lose any progress.”

Out of all the different effects and techniques Sanchez uses, she has developed a preference for creating fake bruises.

“My favorite part of the process is fake bruises because it’s the easiest and there’s not really a right or wrong way to make a fake bruise,” Sanchez said. “It takes almost every look from looking fake or flat to looking realistic.”

Currently, Sanchez shares all of her looks on social media, @kylee_._s, in order to document her progress as an SFX makeup artist. In the future, she hopes to have a career where she will be able to continue this work either on the set of a horror movie or play.