Rewarding students for acts of kindness 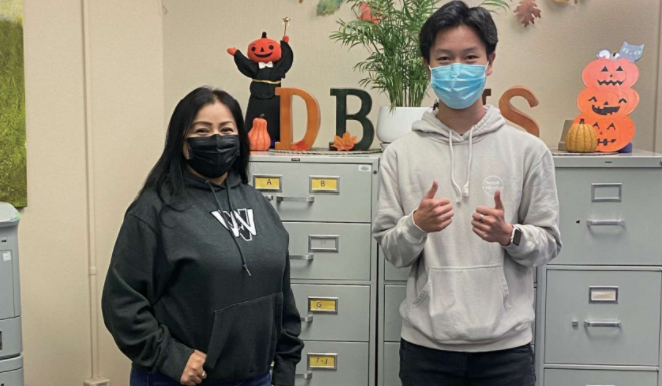 Michael Pribadi was awarded for his professionalism towards parents in the office.

Several Diamond Bar High School students have been caught in the act— of doing the right thing.

On Oct. 7, USB kicked off the campaign by distributing “Caught in the Act” (CIA) cards as a means to promote kindness on campus.

“USB started this because so much has happened during quarantine, and we’ve had a lot of people struggle getting [used to] this new environment,” IOC chairperson junior Gabriela Li said. “I think promoting incentives for acting kind to the community and the students on campus encourages everybody to be more kind.”

CIA cards can be redeemed at the front office, where recognized students receive Chick-fil-A vouchers, and staff members who participate receive one as well. In addition to this, each selected student is entered into a raffle for a chance to receive an even larger prize such as a Raising Cane’s gift card, mini projector, DoorDash from principal Reuben Jones, mini fridge, wireless keyboard, Taco Tuesday for a month or a Knott’s Scary Farm ticket.

“USB hopes to have a weekly winner for as long as we can provide prizes and as long as students turn in cards,” USB activities director Janna Van Horn said via email.

One of the first students to win the weekly raffle was senior Michael Pribadi, who was rewarded for his professionalism while speaking with students and parents in the attendance office.

“[Talking to students and parents] benefits the office ladies the most because I’m taking some of the load off of them by doing some of their work,” Pribadi said via Instagram.

“When a student holds the door open for a staff member or someone picks up extra trash at the end of lunch, helping a friend—these are just a few examples of what might earn a student a CIA card,” Van Horn said.

DBHS staff members express positive feedback on the act, such as English teacher Amanda Avina, who sees value in the program.

“With me explaining [Caught in the Act] to students, it did help give a sense of authenticity behind their actions,” Avina said. “It will help students stop and think about the kind gestures that they do—something that they’ve never considered was good to do—and I think that benefits them ultimately.”