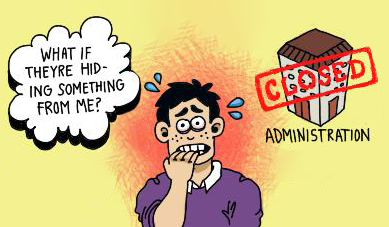 Almost a year has gone by since that tragic March day, when a two-week dismissal turned into a month, and now it’s been almost eight months with no end in sight. Ever since then, we haven’t received  a sliver of information on when we will be returning.

I’m positive that the school administration is keeping something crucial from us—after all, they’re funded by the all-knowing government, so they must be getting some information on when distance learning will come to an end.

Because of this, I’ve been trying to get even a fraction of an update by my own accord. A way I do this is by direct messaging my teachers in Zoom meetings. I ask them the same question every day: Do you know when we are going back to school? I bet that teachers actually know something and their usual reply of  ‘I don’t know stop messaging me this question or I will lower your grade’ is just them trying to conceal what they know.

With those emails that are practically carbon copies of one another, I’ve devised a theory that Brahma Briefing announcements are merely a farce to drive us fellow students away from the truth. Clicking on that wretched purple-tinted bull image yields zero information on when we can actually go back to school. Emails like that must be sent out merely to placate us and prevent us from asking for any more updates, but I, of all people, won’t fall for it.

Due to the lack of information everywhere, I’ve resorted to putting Diamond Bar High School’s number on speed dial just to ask for more information at any chance I have. Even though they blocked my number, it’s not enough to stop me from running to my nearest payphone and ask the exact same question  I’ve asked for eight days in a row: When will we be returning? I think I’m starting to get through to the attendant though; rather than giving me the same response every day, they actually tell me to never call their number again before ending the call! I’m sure I’ve made a breakthrough.

Other than trying to pry out any shred of information out of the school, I just can’t seem to get updates from any place else. There is the news, but I doubt that they’ll know anything since the administration will have a better idea of when we’ll be going back. After all, it is their school.