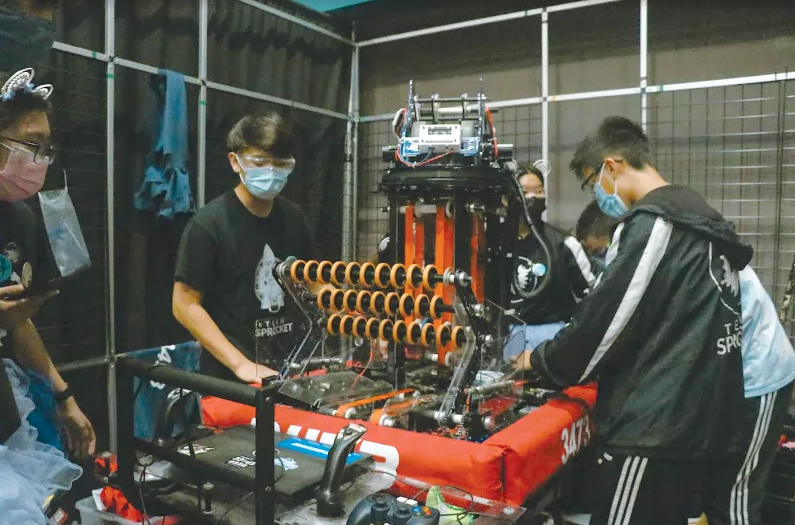 Members scrambled to address issues with the robot, built nearly two years ago in 2020, in order to prepare it for action.

After a two-year recession from competitions, Team Sprocket tackled their first event of the year, but, unfortunately, were not wired up for success.

Beach Blitz is an annual off-season robotics competition held by For Inspiration and Recognition of Science and Technology. The event gives the participants an opportunity to work in a competitive environment and gain experience before more serious competitions begin.

“Beach Blitz is one of the most well known off-season events. It’s semi-official but doesn’t have too much weight on season performance,” junior Dawson Lam said. “There were about a few dozen teams who had come to previous years as well, so we [recognized] them and have communicated with them as well.”

The event required teams to collect and shoot balls into baskets using their robots in a three versus three format, similar to basketball.

“A big issue was our robot, which kept malfunctioning. The robot was built in 2020, meaning that our current senior members were only sophomores when it was first built,” senior Namky Eun said via Messenger. “Our Pit Crew had to learn many of the robot’s quirks once again– some even for the first time.”

Due to the limited time prior to the event the brahmas had to restore their robot, they were presented with several technical issues. Ultimately, unstable circuitry during the competition resulted in a loss for Team Sprocket.

Despite the outcome, members focused on the positive aspects of the competition and saw the experiences as more of a learning opportunity.

“Overall, I think Beach Blitz really boosted our team morale. Despite ranking 33 out of 34, our team gained a lot of competition experience,” Eun said. “We learned a lot of new troubleshooting skills that will prevent us from having more malfunctions in the future, and we also connected with a larger part of the FIRST community. We look forward to this year’s build season and we are confident that we will perform well in our next competition.”

Team Sprocket is scheduled to begin competing in January after winter break. However, due to COVID-19 restrictions, the future for their season remains uncertain.

“In the future competitions, we will be using a new robot that we are going to build next semester which should be better since current members may be more comfortable on a robot that they built,” junior Jeffrey Gong said. “Additionally, everybody will have more experience and practice so we can feel confident going into future competitions.”