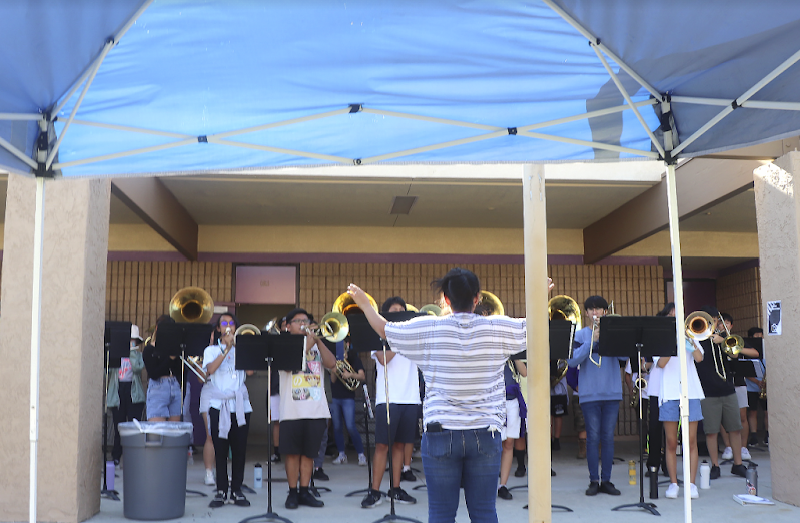 Music director Marie Santos of the Thundering Herd marching band guides the brass section in rehearsal of a performance.

Putting their best foot forward, Diamond Bar High School’s marching band, the Thundering Herd, prepares to step to the sound of their music for the upcoming Placentia Band Review on October 9.

While musicality is the main aspect that is graded during the review, the overall performance and the marching skill of the band will also contribute to their score and final placement in the competition.

“We’re focusing on a combination of music and marches. This year in particular, we are spending more time on marching because it’s a brand new thing to 60 percent of the group,” music director Steve Acciani said.

Freshmen and sophomore musicians have yet to perform in a march due to the digital format of last year, presenting new challenges for the band. To negate the stress of inexperienced underclassmen however, the group has been prioritizing marching techniques and self-improvement.

“We were worried going into this year because we haven’t seen the freshmen and sophomores at all, but as a group, they are doing outstanding,” Acciani said. “We even have a few sophomores as drum majors and we have had the first freshmen make the varsity block.”

Besides improving the underclassmen’s skills, the Thundering Herd’s rigorous practice schedule plays a key role in the group’s historic success. The entire band practices on Tuesdays and Thursdays from 4 p.m. to 6 p.m. every week. In addition, brass and woodwind instrument sections practice independently after school.

“The upperclassmen support the underclassmen by doing weekly or even daily sectionals to help make up for lost time,” junior Joseph Wangsa said via text. “The only main change [this year] was a bigger emphasis on individual accountability and effort.”

The band’s improvement is vital as they are currently scheduled to perform and compete at five parades this year including the Placenta, Loara, Riverside King, and Arcadia Band Reviews as well as the Chino Invitational Review.

The band typically receives high scores in musicality, professionalism, auxiliary or color guard and drum major performances at their competitions. In 2019, not only did the band win the sweepstakes, they also achieved a score of 96.2– their highest score that year. So, as the group readjusts to in-person practices, they are focusing their efforts on retaining this prestige.

“My hopes for [the Thundering Herd] are two things: feel normal again, getting back into the flow of things that have made us so successful over the past ten years and regain that feeling of family, that shared work ethic that can only come through something like a marching band,” Acciani said.