Football kicking off on the wrong foot 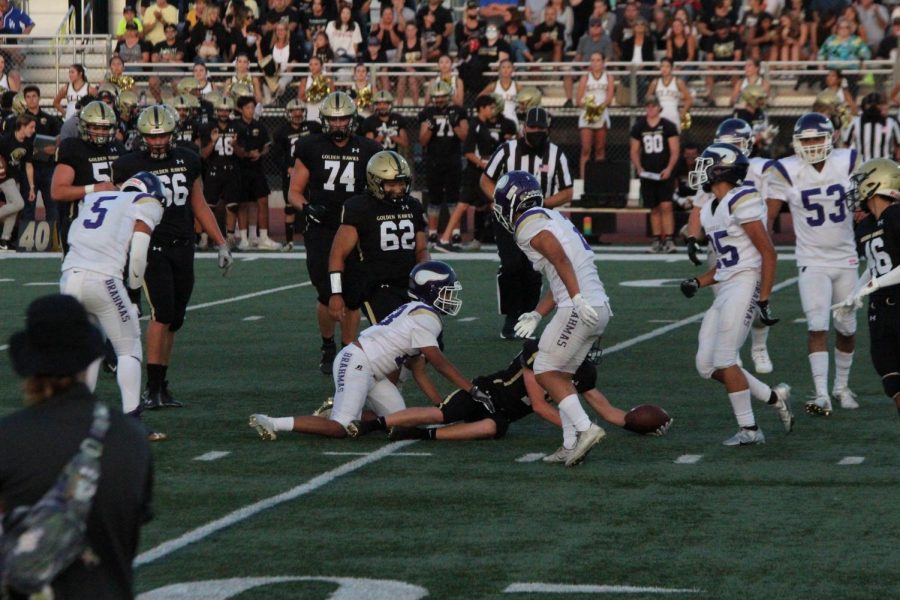 The Brahmas struggled to defeat the El Dorado Golden Hawks in their firs season game, starting with a 0-1 overall record.

The Brahmas opened up their season to a shaky start last Friday with a loss against the El Dorado Golden Hawks, 22-59.

“There were no real flaws during the game, but we made a couple crucial mistakes on the offensive side,” head coach Jeff Reitz said.  “Other than that, it was a close game for three quarters.”

Senior slotback Mikey Gorbea II proved to be the backbone of the team during  the game, leading the Brahmas in touchdowns, rushing yards and total points.

The Brahmas had two rushing touchdowns, both made by Gorbea II after a 21-yard and 10-yard rush. Gorbea II also managed 143 yards out of the 173 yards total for the Brahmas.

Junior quarterback Ryan Lewis threw a total of 240 yards and completed 14 passes for a 48.3% completion rate, even connecting for one touchdown with sophomore Kai Jenkins after a completed 68 yard pass.

“[El Dorado’s] offensive line was four to six inches taller than everyone on my defensive line and outweighed them by 20 to 40 pounds,” Reitz said. “That was their strength.”

Though their season opening game didn’t go exactly as planned, the team is still optimistic for their upcoming season.

“I, along with my team, are all excited that we are all back in person and able to play under the Friday night lights again,” junior Joseph Song said. “I cannot wait for league to start and show our opponents who the Brahmas are and what we can accomplish.”

According to Reitz, the Brahmas have been training with a small, yet talented senior class, featuring star athletes like Victor Flores, Izaac Eubanks, Mikey Gorbea II and Peter Lee, who can play six different positions.

This season, Diamond Bar is aiming to win League, the annual Branding Iron game versus Walnut and earn a chance to compete for a CIF title. Aside from winning, Reitz would also like the boys to prioritize the experience of playing with each other.

“It’s not just about winning, it’s about sharing the experience,” Reitz said. “My goal is to put the guys in the right [position] for them so they can have the most success.”

The Brahmas now have a 0-1 overall record and will play their second non-conference game of the season against the Chino Cowboys on Friday.