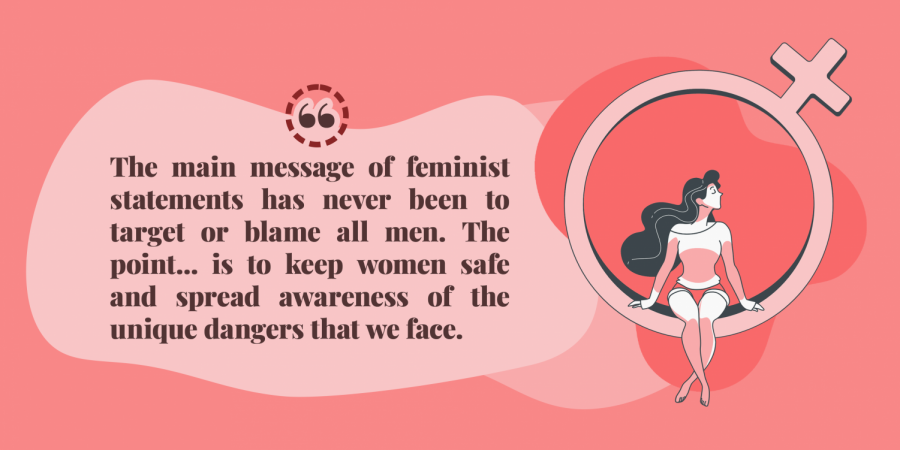 Author and feminist Margaret Atwood famously wrote about asking a male friend why men feel threatened by women, to which he responded that men are afraid to be laughed at. She then asked a group of women why they feel threatened by men and they all had one answer—the fear of being killed.

Feminist statements that reflect this fear, alongside warnings for women to be careful around men, have started receiving backlash for generalizing the male gender. As this controversy has gained more social media attention, the most prominent argument is that it’s “not all men” and women shouldn’t assume that it is.

We understand that it isn’t all men, and the main message of feminist statements has never been to target or blame all men. The point of these messages is to keep women safe and spread awareness of the unique dangers that we face.

When women talk about being scared or angry with men, it’s due to the fact that the majority of us have endured some form of harassment or assault at the hands of men.

In a 2018 survey taken by the non-profit organization, Stop Street Harassment, 81 percent of women in the U.S. have experienced some form of sexual harassment or assault. Likewise, the nonprofit anti-sexual assault organization Rape, Abuse & Incest National Network found that one out of every six American women have been victims of rape or attempted rape and 90 percent of rape victims are female.

It is these very statistics that make women view the expression “not all men” as a ridiculous and infuriating sentiment. Realistically, it isn’t all men, but the phrase should never be used to invalidate the justified feelings women have toward men or to bash feminism as a whole.

Women don’t have the liberty to pick out which men are good and which are bad. It’s not possible for us to tell who is a threat, so we err on the side of caution, which in turn means being wary around all men.

Another way of looking at the situation is to imagine being offered a bowl of fruit. You are told that a few of them will make you extremely sick but you don’t know which ones. At this point, just to be on the safe side, most people would refuse to try any of the fruit to avoid becoming ill. Some of the fruit may be safe to eat, but without a clear way to tell which ones are, you treat all of them as if they were all unsafe. This scenario can be applied to the way women feel toward men.

Feminist statements only serve to bring attention to the issues women are facing in today’s society. I understand that some men feel frustrated about being grouped with those who commit crimes against women, but that shouldn’t be what they focus on. Instead of fixating on the fact that men are being mentioned as one group, men should be thinking about why women harbor these feelings toward an entire gender and what they can do to help.