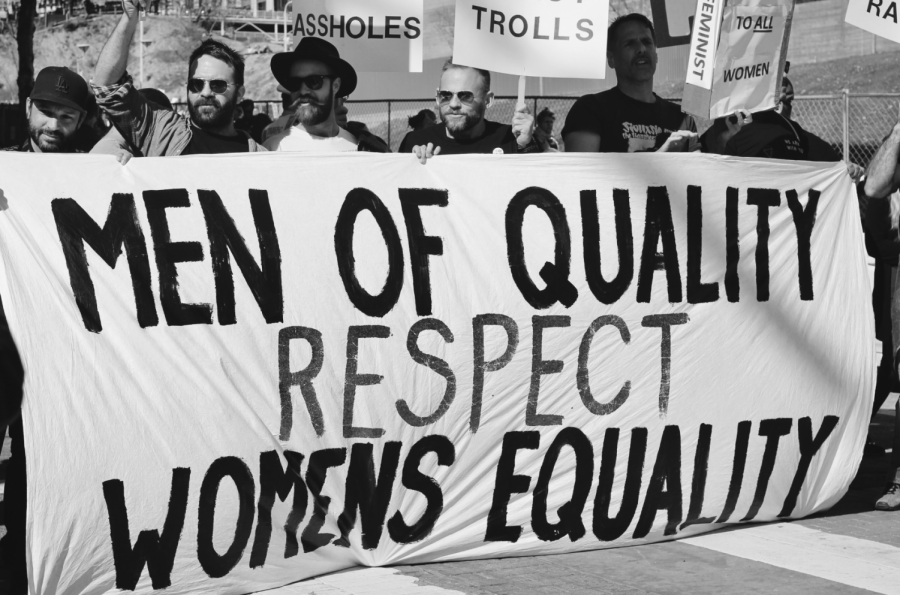 Women are to be touched not seen; alluring but quiet; obedient and complacent— these are the age-old allowances of women in society. While modern times have proven just how false these statements are, especially with the rise of the #MeToo and #Time’sUp movements, changes for women have been slow, and, in political and high society circles, non-existent.

Instead, men have gotten better at hiding their crimes, using under-handed tactics and back-handed compliments to hide their misogynistic nature. This is especially prevalent in America’s gerontocracy, specifically those who entered politics in the 1960s, that commonly touch women in greeting. To them, those “innocent” touches and gropes are normal, customary even. And, as society is progressing and women have become more vocal about such harassment, these are the politicians that hold fervently to their chauvinistic customs, demanding their innocence and preventing the country from true change.

Most recently, such excuses were seen in the cases of Andrew Cuomo—the former governor of New York who, on August 1, was accused of sexually assaulting at least 11 women.

Among the most provocative of the administrative allegations is Lindsey Boyland, a former administration aide to Cuomo, who told the New York Times that he’d “go out of his way to touch her on her lower back, arms and legs.” Similarly, but outside of work misconduct, 33-year-old Anna Ruch received unwanted advances from Cuomo at a wedding when he “aggressively placed his hands on her cheeks and asked if he could kiss her.”

What’s even more daunting is that these accusations are not the first. Multiple women in 2020, starting with 25-year-old Charlotte Bennet, accused Cuomo of sexual harassment. Bennet, a former aide to the governor, told the New York Times how Cuomo would commonly ask about her sex life, going as far as to ask if age was a concern in her romantic relationships.

To each of these cases, Cuomo responded that he “never touched anyone inappropriately” and that “kissing and hugging was his ‘customary way of greeting.’” If anything, this response shows how inherently backward Cuomo’s thinking is; in no circumstance should such behavior be exhibited when greeting others.

Yet, till the end, Cuomo denounced everything as accidental, even as he announced his resignation, which was only after pressure from his constituents, Biden and various Democrats in the House and Senate.

In hindsight, it sounds almost contradictory; that a Democrat with two daughters and a wife would hold onto such conversative, heinous ideals. But, sexual assault has no party affiliation and may be one of the sole things that many male politicans have the same opinion on.

From the beginning of his 2016 campaign to his 2020 re-election defeat, former Republican President Donald Trump has been accused of sexual misconduct by over 26 women. Dating back as far as the 1970s, women have accused him for various sexual crimes, including harassment, groping, assault and, even, rape. Since many of these allegations were made during his time in office, Trump simply dismissed these claims, labeling these women as “liars” and forcing them into silence.

Of course, Trump and Cuomo are only two of the many accused of such obscenities; politicians like Brent Kavanaugh, Bill Clinton and many others have followed similar patterns in sexual harassment allegations: accused and tried, but rarely condemened. These figures have even managed to influence the thinking of younger politicians, exemplified in the case of R-Florida Representative Matt Gaetz.

A 38-year-old conservative who is currently serving his first term, Gaetz was accused of having a sexual relationship with a 17-year-old minor in mid-May. According to the New York Times, instead of taking the claims seriously, Gaetz brushed the issue aside and called his federal investigation an “elaorate scheme involving ‘false sex allegations’ to extort him and his family of $25 million.” Gaetz’s case is only one of many that prove how politicians are taught to side-step, slowly and carefully so that public opinion sways towards them.

However, it’s more than just politicians; also in the mix are highly esteemed corporate executives, billionaire celebrities and all of those who ride the high horse of being the top 1%. So, what all these cases have really proven is one thing: we, as a society that demands justice, have failed to hold the top 1% accountable for their crimes and, in the process, have allowed for a misogynistic culture of “innocent” touching and “accidental” sexual assault to thrive.

If we truly want change to occur, then we must hold these men of “high importance” accountable for their misconduct. It is only then that society can begin moving towards the basic rights and protections that all human beings, including women, are entitled to.