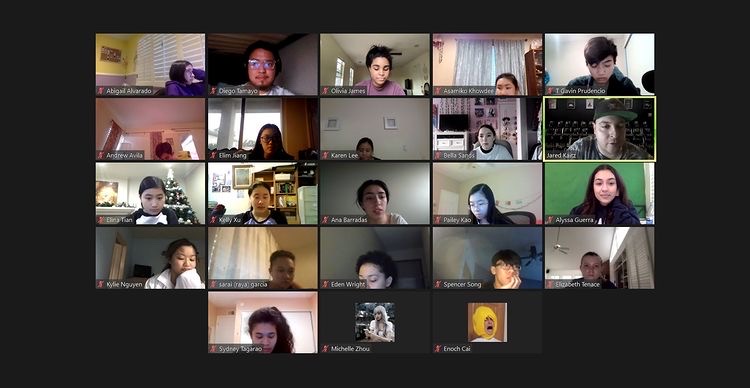 In the same vein of its Zoom rehearsals from last semester, the Diamond Bar High School Drama Department is preparing virtually for its Spring performance of the romantic comedy “The Wedding Singer.”

The production, scheduled for April 23-25, has the support of two choreographers, Dance teacher Kari Simonson and professional choreographer Dominique Araiza. Auditions, which were held in January, consisted of students sending in videos of themselves performing scenes and songs for the characters they wanted to play.

Rehearsals for “The Wedding Singer” have been going on since the second week of January. Senior Diego Tamayo said that it was a quicker transition than normal, but it was fun because performers were able to explore their characters immediately.

“In comparison to our fall play “Get a Clue!” from the previous semester, the practices, for sure, are smoother because the cast members understand the protocols for digital rehearsal better,” Tamayo said. “The rehearsal runs of our first fully digital show was rougher, however now with the past practice, we’re now consistent with learning our songs, choreography and scenes.”

Freshman Elizabeth Tenace said that Drama director and teacher Jared Kaitz has been managing practices and helping guide students through any inconveniences caused by the new methods of practice.

“Practices have been going very smoothly,” Tenace said. “Mr. Kaitz helps a lot with the different parts, showing them to us and playing them on keyboard for us to hear as well as posting different tracks on Google Classroom with our different parts on them.”

Due to practices being held over Zoom, performers have to deal with lag and other connection issues on occasion. Tenace explained that this can cause issues when learning parts in songs and other performances, but Kaitz helps out with this by cueing when different parts start during practice.

“The adjustments are still difficult because of how vastly different these new methods of practice are from our traditional rehearsal approaches when the drama room and stage were available,” Tamayo said. “However, with rehearsals each week since early January, we have eventually gotten used to this new format out of necessity.”

Tamayo said that one of the main obstacles to the current format is the inability to sing as a group due to lag on Zoom calls. To remedy this, each member has been practicing individually so that once filming takes place, they can stitch individual voice recordings together to create a mix that sounds like a group performance.

“Based on how rehearsals have been, I’m overall pretty optimistic about our show’s completion,” Tamayo said. “However, I do think we can improve on our character connections once we improve our scene work, songs and choreo. After we have these technicalities improved, the natural flow of the characters will be able to truly tie everything together and create a fantastic show.”