Dedicated dancing from a distance 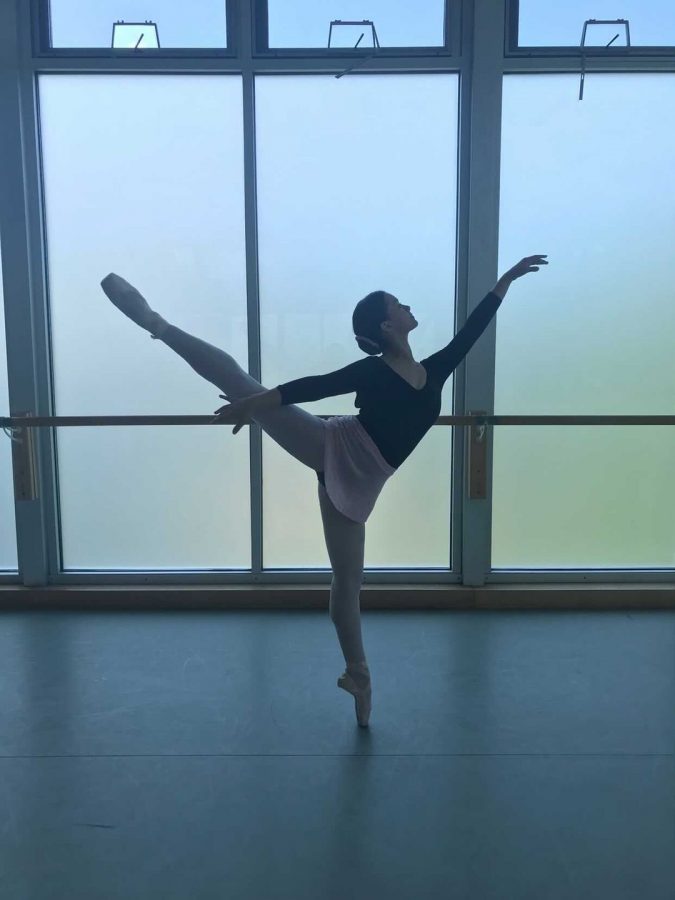 From singer Tiffany Young to actress Amrapali Ambegaokar, the Diamond Bar High School Performing Arts Academy has seen no shortage of students who choose to pursue a career on the stage.

You can add 2019 alumna Alexie Montoya to the list, who has been working on her professional career in ballet under pandemic conditions with the State Street Ballet company as a trainee.

She started taking dance lessons when she was 3 years old, entering her first competition at 5. At DBHS, she was in the Advanced Dance Ensemble for two and a half years before transferring to the Independent Study Program in order to be able to make the commute to her ballet lessons. Although Montoya learned a variety of dance styles, including jazz, hip-hop and musical theater, she decided to stop entering competitions to focus on her ballet career.

“My mom decided to put me in dance as a toddler because it was something she used to do as a child,” Montoya said. “I wouldn’t be a trainee with a professional ballet company today if she hadn’t put me in dance at a young age. Dance has had such a huge impact on my life and I really wouldn’t know what I’d do without it.”

Her favorite performances include her four-year stint on the American Ballet Theater’s “Nutcracker” from 2015 to 2019, taking up the role of a chaperone in 2019, as well as her role in Mariinsky Theatre’s “La Bayadere” in 2019.

“I was able to dance with some of the best ballet dancers in the world and even got to see everything going on backstage,” Montoya said. “It was such an extraordinary opportunity.”

An aspect of performing as a ballet dancer that Montoya said she enjoys is how she can convey a variety of things through just her movements and the music.

“A ballet is kind of like a play. Each one has a different story and you tell it with your dancing. I enjoy performing the most as a ballet dancer because it makes me feel like a whole new person while I’m up on stage,” Montoya said.

Part of Montoya’s inspiration comes from ballerina Misty Copeland, who was the first African American woman to become a principal dancer–the highest rank in a professional dance company–at the American Ballet Theater. Montoya said that Copeland gave her the confidence to face her own body insecurities and to work hard at becoming a professional in ballet.

“Body dysmorphia is a huge problem in the ballet world. Misty doesn’t have your stereotypical ballerina body, but she sure knows how to dance beautifully and has lots of talent, Montoya said. “She did give me a lot of inspiration to never give up just because of something I can’t fix about myself.”

The company Montoya currently trains under, State Street Ballet, is a professional ballet company based in Santa Barbara. The company allowed her to practice briefly in the company’s dance studio during quarantine, before resuming remote practice due to COVID regulations when Santa Barbara entered the purple tier.

“Zoom is extremely difficult for a ballet dancer because of WiFi problems and space issues. I have chronic shin splints and dancing on a hard concrete floor wasn’t helping my injury at all,” Montoya said.

According to Montoya, internet connection issues can interrupt the music she dances to, making it harder for her to learn and perfect movements. She also said she had to be careful about where she practices inside her house, as not to knock anything over. She says the environment at home has also affected her mentality.

“Motivation, on the other hand, was very hard for me to find during this time because dancing at home isn’t the same as dancing in a studio,” Montoya said.

Before quarantine, Montoya practiced up to 36 hours every week. Now that classes have been adjusted due to social distancing restrictions, Montoya said she dances for about 20 to 24 hours a week.

Her personal advice for aspiring dancers is to never give up, to always keep pushing and to trust in the process.

“I know it’s often said amongst us but I’m serious. Once you give up, you’ll regret quitting,” Montoya said. “I know it can be mentally draining, especially if you have Russian ballet teachers, but they only say ‘mean’ things because they know you’re capable of doing it, and they do it because they care about you and want to see you succeed in your dance career.”