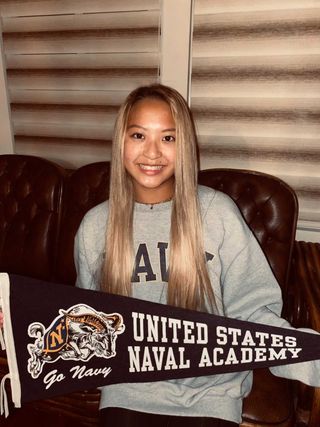 With many high school athletes facing the hurdles  of college recruitment during the pandemic, Diamond Bar High School junior Mackenzie Kim has already taken the plunge in signing with a prestigious military school. Announcing her commitment to the U.S. Naval Academy in early March, Kim aspires to represent the country in professional diving as well as forge a medical career with the Navy.

Spending much of her childhood as a gymnast, Kim was among California’s top athletes in the sport; she represented the state in the 2018 USA Gymnastics Junior Olympics and was placed to compete in the highest bracket. However, Kim said that her time in gymnastics was riddled with major injuries.

From fractures to muscle tears, she eventually made the decision to transition to diving and adjusted easily to the new sport within no time, citing the similar skill requirements as an advantage.

Now training everyday at the Rose Bowl Aquatics Center, Kim spends an average of 22 hours diving each week, with six hour sessions on the weekends and two hour practices on the weekdays after school.

“For practice everyday, my routine is stretching, running, and conditioning to warm up,” Kim said. “I talk to my coach at the start to know my goals for the practice or what skills and meter I would be working on.”

Holding countless accolades under her belt, Kim said her success stems from  perseverance and work ethic as well as the influence of her parents and through her competitions at CIF for the DBHS swim and diving team. She also excelled outside of school, qualifying for Zones against collegiate level contestants to go on and place at Nationals. Through this she was able to gain exposure and soon received interest from numerous universities.

“I have a passion for diving so I want to be able to continue doing it in college so getting recruited was one of my goals,” Kim said. “Many coaches contacted me and watched my videos through clips.”

Though colleges have cancelled all official visits since last March, she was able to meet with prospective teams and coaches through virtual “junior days.” Eventually disclosing her verbal commitment to the Naval Academy via social media after long discussions and thorough research with her family, Kim keeps in contact with her coaches through Zoom and phone calls.

“The diving program at the academy is great and they have a beautiful 10 meter tower, which is my favorite event to compete,” Kim said. “My brother is a sophomore there too so that may have influenced me a little bit.”

Eager to represent the country through a professional diving career as well as explore her interests in the medical field, Kim said she hopes to inspire others to pursue their dreams despite the obstacles that may come with it.

“I didn’t always plan to go to a military college until I did more research on it,” Kim said. “I committed to the Naval Academy because I wanted to do something bigger than myself and serve the country.”