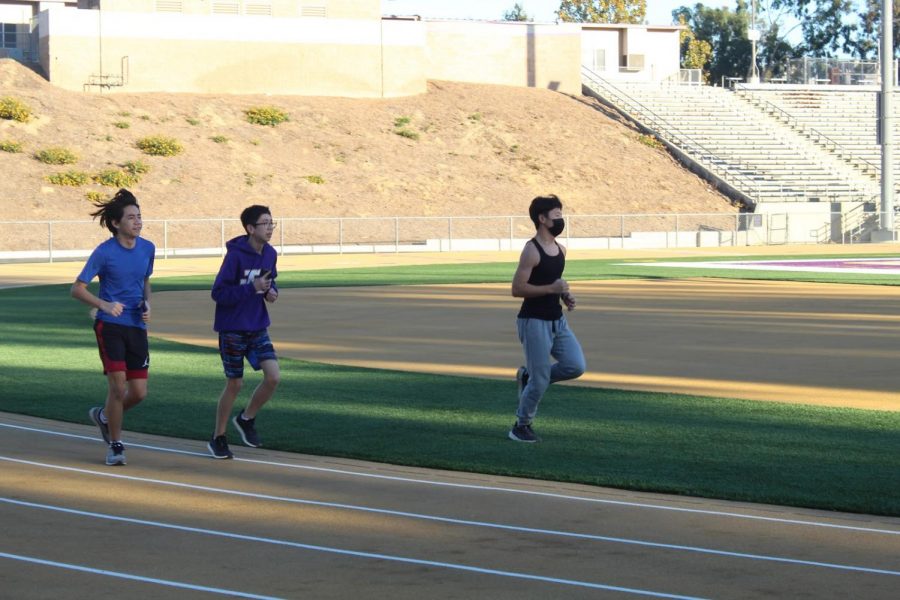 Because some  students were struggling to balance online school with sports commitments, the Diamond Bar High School cross country team has made  multiple cuts to its roster this year.

Due to distance learning, Cooke stated there was also a notable decrease in returning runners this year compared to others.

“For some, the virtual aspect of athletics wasn’t as much fun as being in person. Many of the athletes that chose not to return mentioned they found it hard to stay motivated without their teammates around,” she said.

This decline affected the non-varsity teams, primarily for female members as almost all made it onto the varsity team this year.

“We only have eight girls on the team due to the pandemic,” Cooke said. “League rules state that the fastest seven girls on each team must be on varsity. So, by default, most of the girls will be on varsity and only one will be on junior varsity.”

Although the team is accustomed to cutting athletes that show less enthusiasm for the sport, members believe the main cause behind this year’s ousts is the pandemic’s effect on students’ personal lives.

“I definitely think people are having trouble balancing everything. There’s just so much lack of motivation,” sophomore Naddy Mannix said via Instagram.

Mannix said these cuts actually aided the team as it ensured that only the most dedicated members would continue.

“I don’t think it [the cuts] has impacted the team, the practices, or myself in any negative way,” she said. “If anything it has affected us in a positive way because now we [current team members] are only surrounded by people willing to put in the work.”

According to head coach Malinalli Cooke, there have been  11 cuts made to the team so far–six of which were boys.

“Five boys and two girls were cut because they did not meet the time requirement, one boy and three girls decided not [to] continue with cross country,” she said via email.

In light of the pandemic, Cooke explained that she actually provided more leeway for students wanting to participate in cross country this year. Rather than ruling out any Brahmas that did not make the team during their first tryout in August, she allowed them to stay in cross-country during preseason in case they managed to improve their time’s enough within those 18 weeks to qualify for the team.

“So basically, because of the pandemic, these kids were given an opportunity that has never before been given to previous aspiring cross country athletes,” Cooke said.

Cooke stated that she makes these cuts to benefit the other athletes and ensure the team isn’t being held back by less dedicated members.

“[I] don’t think these cuts will impact the team negatively. In order for a team to stay strong we need to have kids on the team that are motivated to work hard and improve in the sport so that we can work towards a common goal,” she said. “The kids who didn’t make the team the second time around had been demonstrating to me that they were not really that motivated to be on the team in the first place.”