Copping a place at DBHS 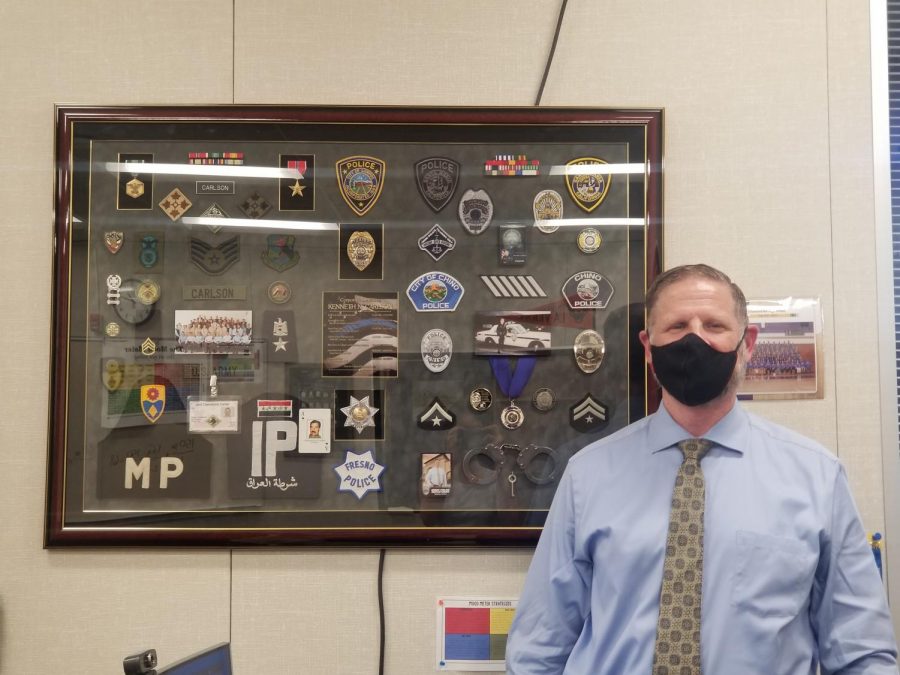 Utilizing skills acquired over a decades-long career in law enforcement, Forensics Chemistry teacher and Pathways advisor Kenneth Carlson has made himself the resident jack-of-all-trades at Diamond Bar High School.

Despite having only joined DBHS as an official staff member for three years, DBHS is far from Carlson’s first experience with a new work environment. Having adapted quickly, he has taken on multiple roles at DBHS, ranging from teaching five periods of Forensics Chemistry to assisting Mock Trial with his background as a former police detective.

Since joining the military at the early age of 18, Carlson has climbed the police ranks several times over, was part of a SWAT team and trained Iraqi police in the first part of the Afghan War—all in 33 years. These experiences, however, paled in comparison to his time as a hostage negotiator.

“I was blessed enough to, on four occasions, talk people out of killing themselves,” Carlson said. “You never know how those things are going to turn out. I don’t know exactly what will happen to them, but some are doing better; that’s what I’m most blessed about.”

A passionate scholar, Carlson took advantage of the educational funds provided by the military in exchange for his enlistment. During his time in college, he dabbled in classes ranging from forensics to anthropology, graduating in 2009 with an AA in Liberal Studies and Social Science from Allan Hancock College, and 2012 from the University of La Verne with a Bachelor’s in Criminology.

“It really helped me as an investigator, and I was always a student, learning about what I needed to present and work on,” Carlson said.

Since college, Carlson has spent a good portion of his career teaching others, from officers in Afghanistan to law enforcement hopefuls, before returning to his roots in ROP programs, leading him to DBHS.

“I was looking for ROP programs and I saw the quality of education with people that have come out of this school,” Carlson said. “I figured I always like to work for the best, so I was blessed that I actually made it.”

Thanks to the skill sets he acquired in college, Carlson helped to alleviate the burdens of those he worked with by simplifying complicated scientific terms and phrases for jurors to better understand cases. At DBHS, his skillset can be seen translated into his instruction, aiding his students to understand the world of chemistry through the world of forensics.

“Although I don’t have a PhD or a degree in Chemistry, I’ve had to teach myself that basic level of science in a wide variety,” Carlson said. “They needed a lay person to interpret what they’re [jury] about to hear from an expert, and as an investigator, I prepare the jury.”

Aside from providing a supportive learning environment, Carlson also implements real life cases to his curriculum. In his Forensics Chemistry class, there are a number of labs that mimic real crime scene investigations of the past—all of which Carlson himself has actively partook in or studied.

“You want to create a dynamic environment, one that’s realistic, interesting or entertaining, as much as you can write while still delivering content,” Carlson said. “I go by my experience and research, but I read research articles and things of that nature and trade websites.”

Having always been an empath, the Forensics Chemistry teacher found it an invaluable asset during his time in law enforcement and at DBHS. His encounters with people of varying backgrounds has greatly influenced his ability to communicate with students, as well as help them through the occasionally difficult times of adolescence.

“In getting to know people’s minds, getting them to their worst moments or reaching out to them and having them understand that I don’t agree with what they did, but I’m going to treat them with respect and empathy. I’ve made a lot of connections with people of all walks of life, I think I left a positive mark in most people’s experiences even if I did arrest them,” Carlson said.