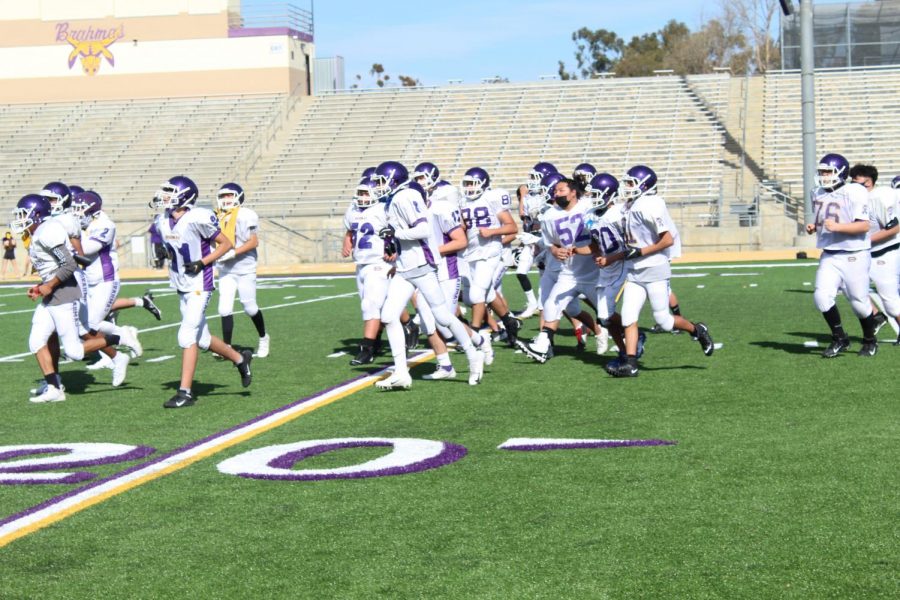 After months of postponed schedules in the CIF Southern Section, Diamond Bar football is back on the field and in high spirits, having won its first game of the season last Saturday against the Rowland Raiders 32-13.

The Brahmas’ dominant defensive performance was crucial in their victory over the Raiders as they gave up just two touchdowns over the course of the game—one after an offensive fumble at the eight-yard line and the other following a poor punt.

As a whole, the defense combined for  61 tackles and eight sacks. Head coach Jeff Reitz praised seniors Daniel Solis, Michael Galvan, Jacob Friend and Brian Collison for their exceptional play as they led the defensive team.

“None of it would have mattered without [senior] Brian Collison at noseguard,” Reitz said. “He kept holding their whole offensive line from getting any kind of push.”

The game started on right foot for Diamond Bar with a 72-yard  kickoff return by Friend for a touchdown. Shortly after, the Brahmas’ defense forced a fourth-down turnover, which put the offense in a solid position for another touchdown. After consecutive successful offensive runs, sophomore quarterback Maddox Bernardino scored the second touchdown with a quarterback sneak at the one-yard line. The first quarter ended 12-0 in favor of the Brahmas.

In the second quarter, following a series of possession changes from both teams, junior wide receiver Peter Lee slammed into a Rowland defender en route to a 21-yard touchdown. A successful extra point attempt by Diamond Bar ended the first half with a score of 19-0.

To start the second half, junior running back Michael Gorbea took advantage of a hole in the Raiders’ defense run for a 40-yard touchdown. In the following possession, the Raiders reached the 20-yard line after two completed passes and a run by their offense. On a fourth-down field-goal attempt, the Raiders attempted a trickplay, but failed because of a tackle by senior Jacoah Chennault. However, Rowland  managed to recover a fumble by the Brahmas at the eight-yard line and proceeded to score their first touchdown. A missed PAT attempt by the Raiders ended the third quarter with a score of 25-6.

In the final quarter, a poor punt from deep in  Diamond Bar territory resulted in Rowland’s start at the 33-yard line. With an advantageous position, Rowland went on to score their second touchdown with a roll-in touchdown, along with a successful PAT attempt. Diamond Bar answered back with a 35-yard running touchdown by Bernardino as Rowland’s defenders failed to keep up with him. A successful PAT that followed was the final change in the score, resulting in a 32-13 victory for Diamond Bar.

“Since I’ve been here, we’ve lost [against Rowland] two years in a row,” Reitz said. “It’s exciting to beat a good team that is well coached.”

Although the Brahmas were victorious in their opening game, Reitz said his number one concern was the team’s conditioning and strength after not training for an extensive amount of time due to health protocols.

“We are still not in good cardiovascular shape and we haven’t lifted for the last nine months like you normally do,” Reitz said. “It’s a big concern, but it was neat that we got through; I’m grateful that neither team had a big injury.”

In this unprecedented football season, not only does Reitz have winning as his goal, but he also has other hopes for his players that go beyond winning each game.

“The most important [goal] is that the seniors have a blast playing,” Reitz said. “This is their last hurrah and I want them to have a good time and a great experience.”

The Brahmas will play their second game of the season, a non-conference game, against the Santa Ana Saints on Friday.