Boys dominate in the water 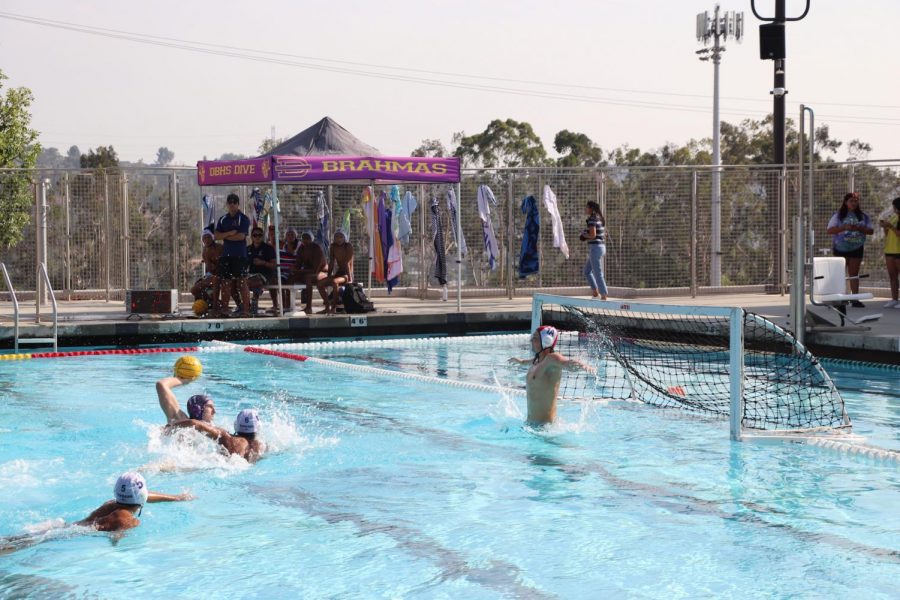 Senior Nicholas Murray dives in and catches the ball, preparing to score a point at home against Bonita High School.

Starting off with a win in a home game against Cypress High School 20-5, the Diamond Bar High School boys waterpolo team dives into the season headfirst with an ace.

The home game against Cypress High was sharp and fast, with the Brahmas gaining a two point lead within the first three minutes of the game. There were some technical difficulties with the timer, but the surging energy within the water polo team was apparent, even to the spectators in the stands. The team’s first game was an overwhelming success and set an assertive tone for the rest of the season.

Head coach Gary Cheever has been coaching boys water polo for four straight years, and, this season, he has high hopes for a League victory.

“This is the first time we’re in the same league as Walnut [High School] and Walnut’s the current returning league champion so the goal is to compete in the championship and win the league… since we are on a two year win streak,” Cheever said.

In spite of the early win, many water polo members decided to not participate in the first few games of the season due to COVID-19 restrictions. Over the last two years, some team members have left, since COVID-19 makes it much more difficult to regulate safety precautions. However, due to the recent changes in regulations, the boys water polo team has resumed regular practice again.

The team’s heavily packed practice schedule is a major factor in their impressive start. Currently, the team is practicing daily from 2 p.m. to 5 p.m. Later in the year, they will transition to morning practices from 5:30 a.m. to 7:30 a.m.

“During the COVID-19 season, we had to maintain social distancing and we couldn’t share balls,” Cheever said. “It’s like having a basketball player just run track and get basketball practice in that way.”

Despite the risks, the CIF Championship will begin this fall after the league games and will determine the winner of the split. This year’s varsity team has 15 members; it is also the highest turnout of underclassmen on the varsity team compared to the last two years.

“This is definitely one of the most talented groups we’ve had,” Cheever said. “We have a lot of younger classmen on the varsity team so it’ll be interesting to see how they play against programs with more senior teams.”

Competing in Division III, the boys water polo team had their next home game against Rancho Cucamonga High School, Sept. 1, 15-19.