Athletes stay fit by participating in outside sports programs 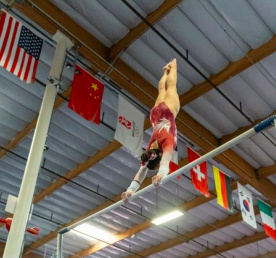 While Diamond Bar High School has reopened its campus for athletic workouts, students have been participating in additional sports programs outside of school in order to further develop their  skills.

Junior Sydney Humphrey has been on DBHS’ varsity volleyball team for two years and was on JV soccer in her sophomore year. She plays volleyball as a libero, and started playing for the club Icon five years ago before  she transitioned to Brea Volleyball Academy since it was more convenient for her to attend. During practice, Humphrey and her teammates mostly focus on serve-receive drills, passing and serving.

“[BVA] has helped to develop my skills as an athlete because it taught me all the basic skills I know,” Humphrey said via Zoom. “I started[ed] off with middle school volleyball, which didn’t have as much time to teach more those skills and those basics, and [BVA] has also really helped me on my conditioning.”

Humphrey also mentioned how BVA has a more diverse mix of girls in regards to skill, which allows the coaches to help each individual on the team improve. At the beginning of the pandemic, Humphrey met with her team over Zoom as well as practiced on her own, but she has recently had the opportunity to attend indoor practices at BVA. Masks are required during practice and members have to use hand sanitizer.

Humphrey also plays soccer as a goalie, and she has been a part of AYSO since she was six. This season, the team could not have any games or scrimmages, so the girls attended practice where they either did individual drills or passed the ball to one other person.

Due to rising COVID cases, her travel team has stopped meeting together for practice. She said she wanted to join the team because she wanted to play with other girls who share the same passion she has for softball.

“It has helped me develop skills such as leadership, time management and creativity,” Martinez said via Instagram. “I’ve also adapted into more of a leader because of this club and having the ability to work with other kids so they can learn from me.”

Sophomore Audrey Huang has been training with Winner’s Gymnastics since 2014 and joined since she wanted to play on a more competitive team. Huang’s team took a three month break from practicing at the beginning of the pandemic, but she’s recently had the opportunity to attend practice again by following standard COVID precautions. She practices exercises like round off handsprings, front aerial back tucks and dismounts for beams.

“I wanted to be a part of this team because back at my old gym, I did not improve as much and [it] got me behind instead of putting [me] where I needed to be,” Huang said via Instagram.

Meanwhile Alex Kim, a DBHS sophomore, has been playing for Prodigy Basketball since December 2020 after his DBHS coaches recommended the club to him.

“The players there, they’re really competitive so it really pushes me to try to get better every time I’m in the gym and always give it my 100 percent,” Kim said.

The pandemic has reduced the amount of days the team practices from four times a week to two times a week, and Kim said that members are advised to social distance to the best of their ability while at practice as well as use hand sanitizer. There is one day dedicated to practicing defense and offense plays and the other day dedicated to practicing individual skills like ball handling, rebounding and shooting.

Kim said Prodigy focuses on the communication aspect of the sport, emphasizing the importance of talking on defense and offense as well as asking teammates and coaches questions. According to Kim, this has allowed him to develop his leadership skills.

“I felt like Prodigy is a really competitive, high level club that could help get to the next level and play in college,” Kim said.