Art of the anatomy 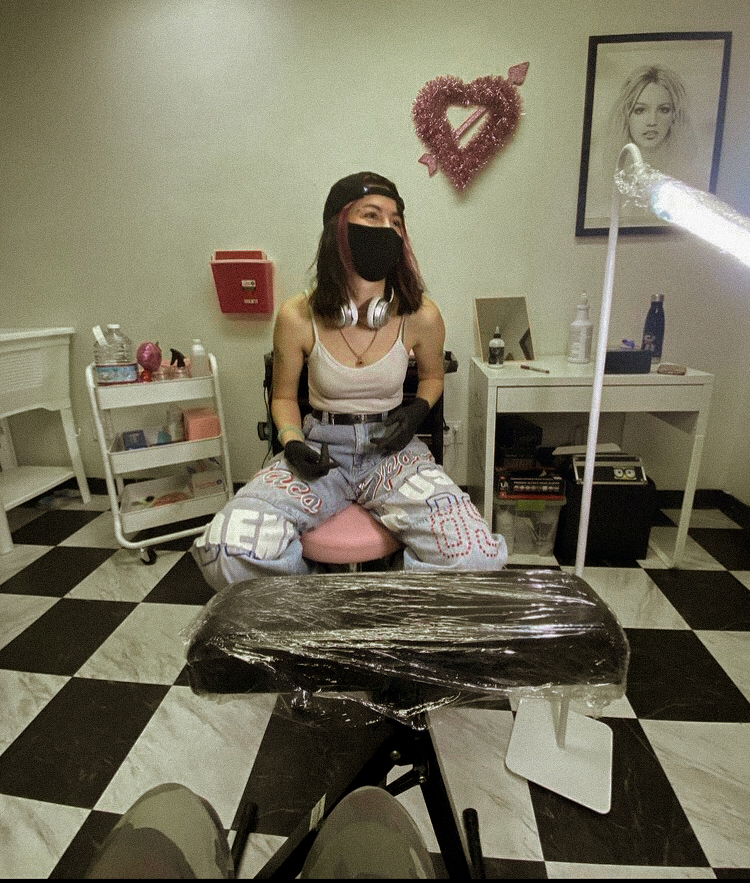 The class of 2018 graduate said she only recently discovered her passion for tattooing after deciding to minor in art while attending California State University of Fullerton.

“My sketchbook was full of random designs and little chunks of Renaissance paintings done in pointillism,” she said via Instagram. “It wasn’t until then [that] I actually thought about tattooing and my professor was all for it.”

Gomez said she purchased an at-home tattoo kit during quarantine and began practicing on areas that, once tattooed, would fade quickly, like her feet.

“People started saying they’d pay me to do it [tattoo] on them and in a month I quit my job and paid off my lease,” she said. “After three months I moved myself to Hollywood and eventually got myself into an all female shop, and got myself a nice apartment downtown.”

Throughout her middle school and high school years, Gomez said she studied hyperrealism and became somewhat of a perfectionist when it came to her art.

“I would paint or draw portraits and they would look to [a] tee like the person,” she said.

Despite her initial plans to attend a fine arts academy, she decided to attend DBHS, opting for a more traditional high school experience.

“I didn’t take any art classes in high school, I was actually kind of a film kid. I used to do interviews for the Vans Warped Tour and sit in the video room and edit during any breaks I had,” she said.

Gomez said she gained most of her experience in film while attending DBHS. At the time, she was busy applying for press and going on tours to take videos or record interviews with various bands.

“I wanted to do music videos because I always felt such a strong connection to music but could never make any music myself,” she said.

While attending CSUF, Gomez was a part of Titan Radio, where she had her own weekly show called New Perspective in which she interviewed bands.

“The music and the film industry is really toxic, especially for women, so I just decided to kind of do my own thing [tattooing] and I’ve been pretty happy since then,” Gomez said.

Before securing her spot in an official tattoo shop, Gomez started out as a freelancer.

“I ran a mini shop out of my living room. This is what you call a scratcher and it’s really looked down upon in the industry,” she said. “Once I moved to [Los Angeles] I was doing house calls for a lot of actors and underground rappers.”

Through her freelance work, Gomez met the owner of a popular woman-run tattoo shop known as Little Annie Motel Tattoo Parlor who agreed to take Gomez in as an apprentice.

“Now this [was] a big deal because the industry is male dominated and super gatekept,” Gomez said.

Gomez explained that although most apprentices need up to six months of training before they are entrusted with a tattoo gun, she started taking clients after only a week of apprenticeship.

“I was fully booked the month of January and made almost three times more than my front desk job,” she said.

Despite her work as a tattoo artist, Gomez described herself as more of a collage or multimedia artist. She explained that a lot of her artwork is more eclectic and usually inspired by music.

“I just feel a certain way about music and since I can’t make music I express myself through visuals,” Gomez said.

Although Gomez said she tends to express herself through a more polished artstyle, she still appreciates artists like Jean-Michel Basquiat who create much more eccentric pieces.

“I respect him [Basquiat] because his ideas are so strong that his skill doesn’t even need to be present,” Gomez said.

In terms of her tattoo designs, Gomez said she is still exploring and defining her style but that her work so far is most similar to a gothic art-nouveau style.

Though she works at an established tattoo parlor, Gomez said she considers herself to be running her own business, as she is in charge of booking her own clients, restocking her supplies, managing finances and decorating and maintaining her room in the shop.

“I have no idea how I [have pulled] any of this off really. I really just go through the motions,” Gomez said. “But I guess the saying is true, when you do what you love you don’t work a day in your life, right?”

Although her work as a tattoo artist has only just begun, Gomez said she plans to further her career in the arts and pursue other fields as well. She explained that she currently attends Santa Monica College after having dropped out of CSUF due to the pandemic. She is now looking to transfer schools and continue her education.

“Tattooing isn’t the end of my artistic career [so] to speak,” she said. “I’m going back to school in the fall. I plan to attend Otis College of Art and Design and study product design [but] my true goal is to just travel and make beautiful art.”