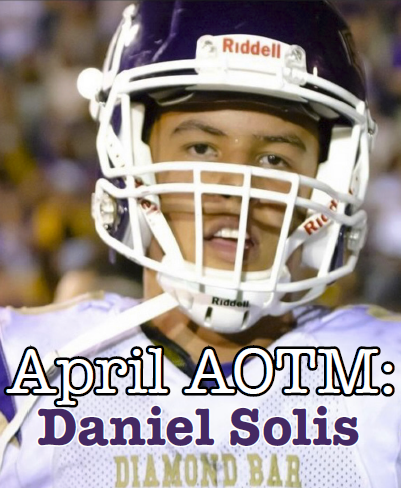 For Diamond Bar High School senior Daniel Solis, football began simply as a fun game when he was five. Now, Solis is on the DBHS varsity football team as an outside linebacker and running back, as well as last year’s All-League football champion.

Solis said that due to his family’s strong association and love for football, choosing to play the sport was a decision that came naturally. With nearly over 14 years of training and experience, Solis dedicates most of his talents to the sport.

“Everything about him as a football player is a coach’s dream…he has always shown how special he is,” football head coach Jeff Reitz said.

There are two major figures in Solis’s life that he says have inspired him greatly in the field of football. The first is Ray Lewis who played linebacker for the Baltimore Ravens in the NFL, and the second is his father who passed away when he was 14.

“My dad motivates me [and] knowing that he is watching me upstairs gives me strength and the power to keep going,” Solis said via Instagram.

Solis accredits much of his skills and talents as a player to his father, who was his first coach and motivator in the sport.

“I look up to my dad because he molded me into the football player I’m today and taught me very much when I was younger,” Solis said.

With football, Solis said that there is almost nothing comparable to the feeling he gets when he plays. He described the field as a sort of homeland, a place that he associates with the extreme excitement of games and frenzied cheering from crowds, as well as the deep bonds and friendships he’s created with his teammates over the years.

“[Football] has been a good experience from freshmen year to senior year…it has been nothing but fun times on the field [with] making memories with my friends,” Solis said.

Last year, Solis was named  as an  All-League Football Champion. This year he was also awarded the title of “Defensive Player of The Game” by Maxpreps during the March 20 game against Rowland High School.

“Daniel has a great work ethic, he practices hard all the time… and as a person he has such a humble attitude, a great team attitude,” Reitz said.

Though Solis said  he has had a great time over the past years with football, he admits he does not seek to play at the collegiate level.

“I hope to use the lessons I gained through my coaches, the tough skin I developed because of them, and apply them for myself in the future,” Solis said.