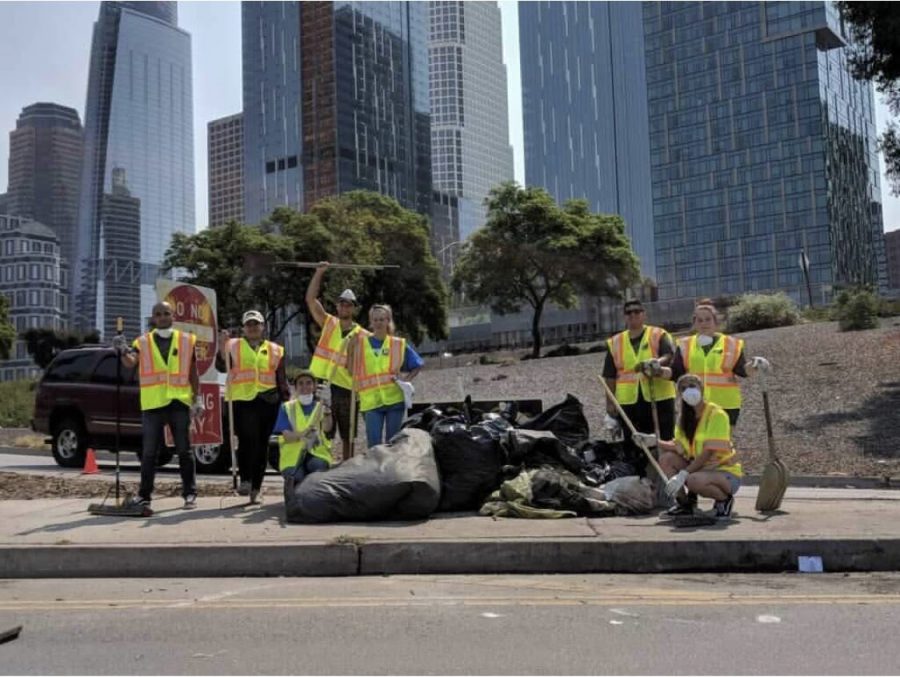 Martinez began Searchlight Society in 2018 in order to mitigate the large homeless rates in LA and improve their livelihoods.

Outside of Diamond Bar lies the reality of Los Angeles: streets covered with tents as the county struggles with its homeless crisis. It’s this very reality that prompted Diamond Bar High School alumna Cassandra Martinez to create Searchlight Society, a nonprofit organization with the goal to rehabilitate and support the homeless.

After graduating from DBHS in 2011, Martinez pursued a career in social services, receiving a Master’s in Social Work from Cal State Long Beach. Yet, it wasn’t until visiting the homeless encampments of downtown LA, during the typhus outbreak of 2018, that Martinez felt inspired to start Searchlight Society.

“We went ahead and talked to [the homeless],” Martinez said. “And, we were like, we could help them live a sanitary life, provide them all these health, basic needs and social services and case management.”

Over the next two years, Martinez and co-founder Daniel Herrera would do exactly that, pro-bono as well. They invested their own money to travel around various regions and counties in Southern California, providing homeless individuals with case management—meaning to connect individuals to social services and healthcare organizations.

However, the duo struggled with various issues that accompany starting a nonprofit organization, from finances to community outreach and recognition.

“It is very hard to do a lot of things for free, especially when we were doing outreach in Long Beach and purchased an ambulance [for case management purposes],” Martinez said. “We purchased it all with our own money; we did everything [from] our pockets.”

Martinez eventually took the social media route to get help from the public, only to receive mediocre attention on all their platforms. On top of that, Searchlight Society struggled with backlash from more established organizations—saying the organization’s youth made them undeserving of support.

“There are still so many people who say: you guys don’t deserve this because you’re brand new,” Martinez said. “They’re like, ‘Who are you guys? Why are you guys getting contracted?,’ so there’s a lot of politics and competition.”

Martinez stated how she continues to be inspired by the resilience of the people she works with and helps every day.

“Meeting all the individuals who come and meet with us, everyone bringing a different story— it’s just amazing,” Martinez said.

With this motivation, Searchlight Society has significantly grown since its founding, garnering connections with city council members, such as Diamond Bar City Councilman Andrew Chou, and signing contracts with colleges and other cities, such as Long Beach, to further their case management programs.

Just recently, they collaborated with Victor Valley College for the “It Takes A Village” initiative—a program that provides homeless or impoverished students housing support and case management. While the program was only developed in late 2020, Martinez hopes it will set a precedent for the future of Searchlight Society.

“There are so many homeless students going to college right now,” Martinez said. “So, we really hope this program highlights what we’re doing and what we’re succeeding in.”

One other initiative Searchlight Society is working on is attaining more contracted work in the los Angeles Area to help the growing homeless populations in downtown.

“San Berandino, especially Victorville is very far, and driving down here is not fun,” said Martinez. “[We] definitely want to bring our home team, which is our case management and mobile team, out to Long Beach and Los Angeles.”

Nevertheless, no matter where the program goes, the mission statement of the organization, “one individual at a time,” will always remain at the core of Martinez’s own goals.

“Everyone has their own story, everyone’s working at their own pace,” Martinez said. “The biggest thing is all of these people, they need a second chance, and we’re really hoping to provide that to them.”