A new home for science 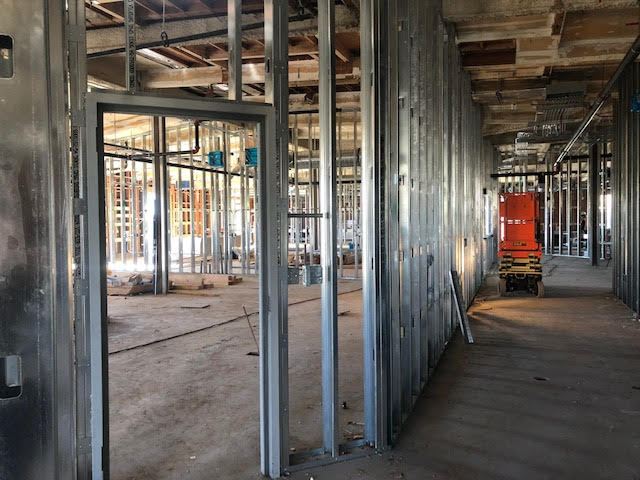 Even though Diamond Bar High School students attended classes online this year, construction on the 500 building has been continuing and is scheduled to finish in time for next school year. Additionally, the plans to create a new and improved 400 building is set to begin later this year.

Construction on the 500 building, which will house 18 new science classrooms, is expected to wrap up in September despite a brief period of manufacturing and vendor delays due to the pandemic. DBHS Operations Manager Mike Bromberg said that aside from those issues, progress on the building has been going smoothly. Everything inside the building has been removed and the walls are being built, with the current focus being on implementing better air conditioning and electrical networks for the building.

The goal of these renovations was to modernize the 500 building, which formerly was home to English and history classes, and build state-of-the-art science classrooms in their place. One of the new additions is a collaborative center, which is a lab that classes can use to carry out projects and experiments. It will be located in the middle of the building for all classes to share whenever there is group work. Part of the reason this room was added is to encourage communication between different class periods.

“The collaboration space is when a class can go into a space—or multiple classes—and do an activity, experiment, or whatever,” Bromberg said via Zoom. “It’s designed so the teachers are more interactive with each other.”

Chemistry teacher Teresa Herbert had the opportunity to be a part of the construction project by touring Portola High School in Irvine with other DBHS science teachers to gather ideas for what features she’d like to have in the 500 building. She said the science teachers decided they wanted to have a more spacious room to hold lectures and labs in the same room.

“We’re going to have 10 lab stations in one part of the room but the rooms are large so they’re in different parts,” Herbert said. “So I can have a lab setup in the back, and then when we’re ready to do the lab we can just move to the back.”

Aside from being more spacious than the previous science classrooms, the new building will include new features such as vacuum lines. This will allow teachers to perform demonstrations that were previously too dangerous to do in a poorly-ventilated room.

Once the 500 building is completed, science teachers will move there from the 400 building, leaving it available for the next round of work to begin. Teachers are expected to move into the portables by this summer.

The 400 building’s construction is predicted to start between late 2021 and early 2022, and will last around a year and a half. It will house 24 classrooms for English and history.

The building will have a similar setup to the 500 building, also including a collaborative center. Unlike the collaborative centers in the 500 building, though, the 400 building’s centers will provide a more versatile space. For example, AP History classes are expected to host future collaborations, like the annual APUSH plays, there. Bromberg expressed his excitement for the newer and more polished look the buildings will have after construction is completed.

“The real benefits are when they do a modernization… [construction] makes everything new again,” Bromberg said. “Because right now those two buildings are original to the school—so, 1983, 1984—[and] they’re all worn out.”