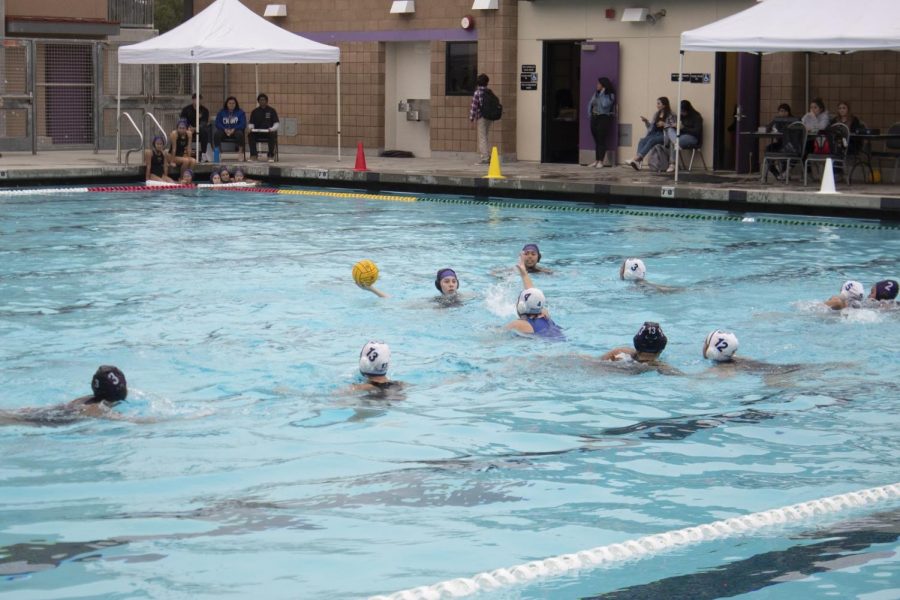 Senior Raquel Figueroa goes for the shot while teammates get ready to defend.

With a 5-3 record in preseason competition, Diamond Bar girls water polo is ready to reclaim first place in the Mt. Baldy League.

Despite starter junior Victoria Madrigal suffering an arm injury earlier this season, the team had an impressive 11-5 win against the Montclair Cavaliers, who were joint-league champions with the Brahmas last year.

“We really want to come out strong and beat them in our first game against them,” Madrigal said the day before the big game. “If we do that, we will have less pressure going into league finals.”

Prior to winning against their rival, the Brahmas lost two consecutive games against El Dorado, 13-8 and Temescal Canyon, 11-5.

The girls bounced back against Norco and Walnut, edging out a close 12-8 win against the Cougars and crushing the Mustangs by a double-digit margin. More recently, the girls won against Ontario 18-3.

“Honestly that [game against Walnut] was the best we played; we just like communicated and we meshed well together,” Madrigal said.

Considering the two losses at the beginning of preseason,  took their losses as an opportunity to learn and improve in the water. They honed in on playing better defense, a key component that was lacking in their games against El Dorado and Temescal Canyon.

“This year we definitely have a lot less drama and that has impacted the team in a positive way,” Madrigal said. “I feel like the main reason why we don’t have drama is because we are all used to playing with each other at this point.”

Julianna Longoria, a freshman who has seven years of experience playing with a high-ranked club team, is one of the most important players on the team this season.  Although she is the youngest and smallest on the team, Longoria is considered to be a high-caliber talent on the roster.

“We have freshmen on the team but she’s like our best player,” Madrigal said. “It’s kind of hard because not all of us can match her skill or match her intense mindset sometimes.”