Swinging to become the king of the court 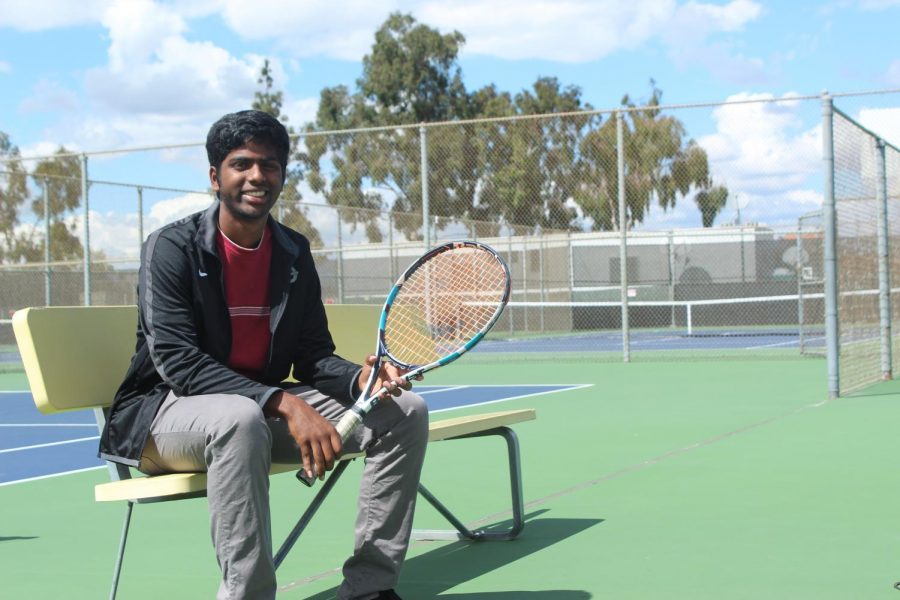 While the sun glares down on the arid, concrete court sidelines, two athletes engage in an intense back-and-forth rally, trading one elegant swing for another. Every move is calculated with the utmost precision since the loss of one game can significantly swing the set’s momentum.

“I visualize how I’m going to serve, how I’m going to play or what to do if I go down; that way, I’m not really surprised by anything [unexpected] that happens,” he said. “Then about ten minutes before the match, I just close my eyes, breathe and calm down: once I enter the match, it flows from there.”

Receiving inspiration from his father to pursue the sport, Arunachalam began his tennis career at just seven years of age. His first interaction with the sport took place  while he was watching a professional match on television.

“The first time I was introduced to tennis was actually when I saw Roger Federer play in the [2008] U.S Open,” the senior said. “I thought it was the coolest thing ever and I remember for one week, I was hitting [tennis balls] against my door because I wanted to play. I just kept playing every year and now it’s a huge part of my life.”

Playing singles since his freshman year, Arunachalam has been integral in the Brahmas’ three consecutive trips to the CIF playoffs.

“[During] my freshman year I was singles two behind Neil [Tengbumroong], and ever since sophomore year I’ve been the No. 1 singles player, the highest position,” he said. “I played  at USTA and it’s where I’m nationally ranked as well.”

Just last year, Arunachalam won the titles of both Mt. Baldy League MVP and Champion, after going undefeated in 30 matches. In 28 of those games, the senior pummeled his opponents six sets to none.

While Arunachalam has racked up impressive accolades for Diamond Bar, he also participated in other renowned tennis tournaments for amateurs, such as the Ojai Tennis Tournament in California. This five-day event features not only the best high school students from CIF regions across California but also invites the top collegiate athletes and teams to participate in their own tournaments as well.

“Those tournaments have always been the most fun for me even if I don’t do well; it’s crazy because there are kids on my level and there are kids that are better than me so I can see how I fare against them,” Arunachalam said. “It [Ojai] has been such a fun experience because you’re playing the best of the best, and when you win against them the feeling is second to none.”

In order to preserve his excellence on the courts, the senior adheres to a strict practice schedule he adopted ever since elementary school. While balancing his rigorous academic classes, Arunachalam remains focused for the hour and a half to two hours of practice he commits to daily.

“My coach always used to tell me it’s much better to practice well for thirty minutes than mess around for two hours,” he said. “Before every practice, I make sure I go in knowing what I want to improve on, and it makes me better with time management. It’s tough but it’s just a skill I’ve learned over the years.”

Arunachalam faced his most significant challenges in the mental game of tennis, describing how the ability to lock-in with the right mindset was far tougher than the physical or emotional aspects in matches.

“Being able to stay focused the entire time for games where one or two points decide the match makes me nervous because you essentially don’t have anyone to lean on,” Arunachalam said. “Like in basketball, maybe you can pass it to a teammate and have them support you, but in tennis, you can’t let messing up one point get in your head.”

Despite taking tough losses, Arunachalam described how tennis was a humbling sport that always revealed areas of improvement in his game.

“It’s so inspiring because unlike other sports where someone is at the same level of excellence, you can see Roger Federer now become a better player than he was four years ago when he was ‘the greatest in the world,’” he said. “I think the ability to continue to keep getting better and applying your learned skills in match play is one of the greatest feelings in the world.”

The senior explained how tennis has taught him the value of perseverance and inspired him to become a better person outside of the sport.

“Just last week, I was down 4-2 and came back 7-5,” he said. “Being able to say that I was mentally strong in bringing myself back has affected me in my everyday life, whether it’s college applications for school or other hardships I go through.”

Arunachalam is looking forward to recreational tennis play at the collegiate level, using the sport as a sense of stress relief rather than playing competitively.