APES classes design initiatives to better their school and community. 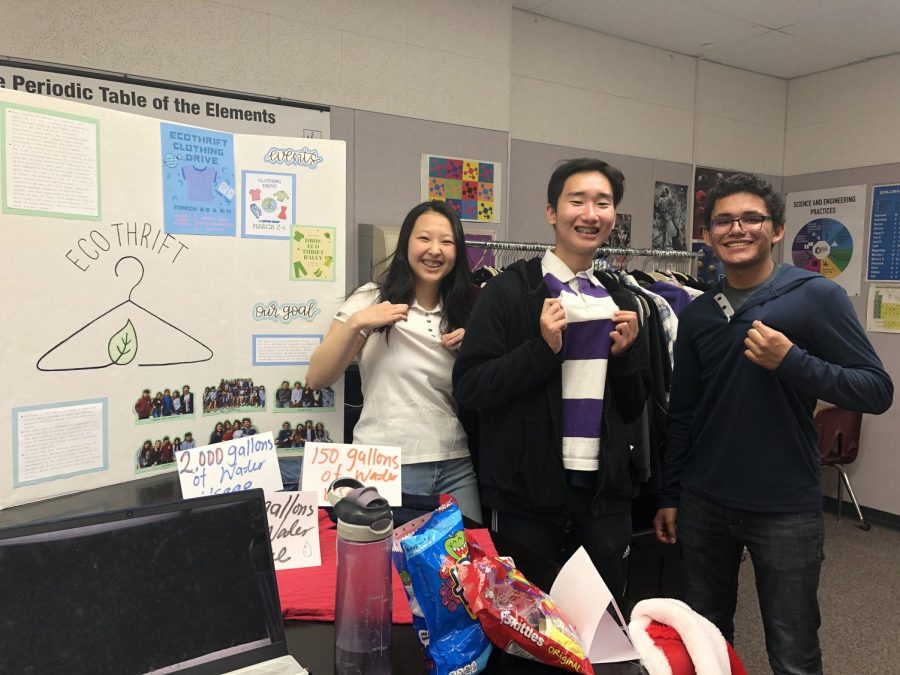 After brainstorming ways to improve the environment and the community, Diamond Bar High School’s AP Environmental Science students are focusing on various aspects of people’s impact on the world and preserving nature for this year’s projects.

In the annual Your World projects, each APES class tackles an environmental issue that exists at DBHS or in the community. Over the course of several months, they research, design, promote, fundraise and try to solve the problem through their project.

Noticing the large amount of trash left around the school, students in Malveaux’s first period started a campaign to replace the plastic utensils in the school’s cafeteria with wooden utensils, a more eco-friendly alternative.

“We want to reduce plastic waste found in landfills, as plastic utensils can take up to 1000 years to decompose while wooden ones take up to 80-90 days,” senior EcoEats president Debbie Yim said.

According to Yim, EcoEats is currently talking to the school district to meet the district’s regulations and obtain financial support so that they can start incorporating wooden utensils at DBHS.

With the devastating effects of the California and Australia wildfires in mind, Malveaux’s third period class created Fire Force.

“We intend to plant succulents in the area behind the 500 building in order to beautify the barren hills and raise awareness of the issue of brush fires, especially in our area,” senior Keshav Sriram, the project’s president, said.

To fund for this project, students in Fire Force plant succulents into pots and sell one for $6, two for $10. They have currently raised over $300 from succulent sales.

Compact to Impact is a project by Malveaux’s fourth period that aims to add compacting devices, which compress and reduce the volume of trash, to trash bins on campus. Doing so would decrease the number of plastic bags used to store trash and lessen the school’s impact on the environment.

“We chose this topic because we realised that a lot of the bins around the school were filled with empty space, and we could save much more in both space and resource use if we just eliminated that empty space,” junior Compact to Impact president Jeffrey Zhou said.

Students are currently working on their initial prototypes, trying to find the most efficient design for the compacting bins.

Valor’s second period class targets trash at DBHS using a different approach. After noticing the numerous dark gum spots throughout the campus, students came up with an idea to discourage others from littering gum on the floor.

With The Sticky Solution, they plan to build a poll box, which serves as a trash can for gum, that will have interesting questions for students to answer. Students can vote by placing their used chewing gum in the compartment of their choice and see the number of votes in the clear poll box.

“People don’t usually think about the issue of gum and effects, but we want to change that in a creative and engaging way where students are involved as well,” junior Jaclyn Lee, the president of The Sticky Solution, said.

As fast fashion changes with clothing trends, Valor’s fifth period created EcoThrift to address the environmental cost of producing new clothes by encouraging thrifting, which can save the resources used to make new clothes and reduce fossil fuel emissions.

“We realized that improving our habits of purchasing/using clothing to promote more sustainable living is an excellent opportunity for humanity to live in better harmony with our world,” the project’s president, junior Diego Tamayo, said.

Students part of EcoThrift have launched a clothing drive and collected pieces of clothing during lunch. In the future, they plan to have an interactive set of stations during lunch to teach other students how to thrift and modify clothes.

Many of the five environmental campaigns are mainly funded by fundraisers, including restaurant fundraisers, and donations. They are also planning to host lunch rallies to further raise awareness. All of the projects have created Instagram accounts to spread the word, and some have created websites, stickers, business cards and pins. They have collaborated with DBHS groups, including Interact and Printed Works, to promote their missions.