Stream It or Skip It: “Start-Up” ultimately falls flat 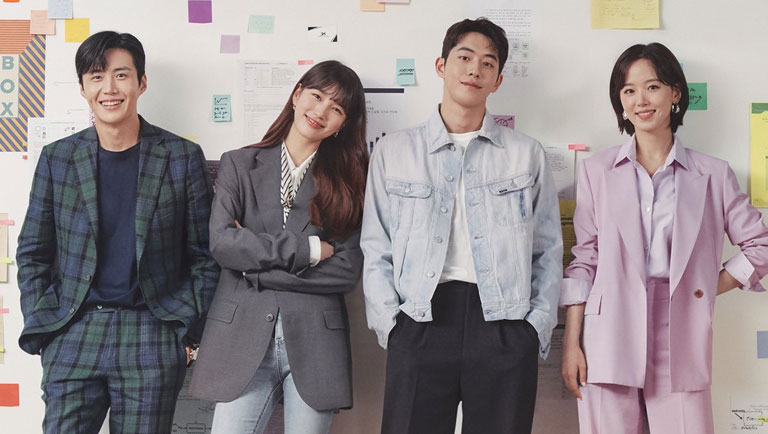 “Start-Up” ended Dec. 6 as a part of Netflix’s new wave of South Korean TV shows. For those looking to get into K-dramas, this series would be a mediocre introduction, as its engaging story begins to drone on in the latter half, growing somewhat difficult to watch.

The show centers around Seo Dal-mi (Bae Suzy), an optimistic high school graduate with dreams of becoming a successful CEO. She eventually finds herself at Sandbox, a utopian tech startup incubator in Seoul, where she must give a business pitch while confronting her estranged sister Won Injae (Kang Han Na).

“Start-Up’s” pilot dedicates itself to setting up the romance plot of the show. In it, Dal-mi receives a note from a secret admirer, who was actually hired by her grandmother to befriend her through these letters to make up for the separation between her and her sister. The troubled orphan Ji-pyeong (Kim Seon-ho) hired by the grandmother impersonates Nam Do-san (Nam Joo-hyuk), a national math prodigy featured in a newspaper. After a string of coincidences, the three meet as adults, all aspiring to build their own businesses while tangled in a love-triangle.

Unlike your typical K-drama love interest, Do-san proves to be awkward, unsuccessful and kind to a fault. As a stark contrast, Ji-pyeong is presented as a classic male lead; rich, aloof and slow to warm up to others. Despite their roles as lead and side character already hinting at the plot’s ending, the audience is never kept too sure who will end up with Dal-mi.

“Start-Up’s” strong first half made it a must-watch for any K-drama fan before it descended into disappointment. Although the show did a poor job portraying romance, its subplots revolving around family and forgiveness really shined, with a recurring motif about the past and letting go of ill feelings throughout. Injae’s character may have been under-utilized for this purpose, but at least there is a worthy conclusion with her family when they patched up their differences.

Outside its few moments of brilliance, the rest of the narrative is a bit of a mess. First, the hypocrisy of Do-san telling Ji-pyeong to keep his emotions under control became slightly insufferable. Many of the actions that Do-san take in the show are driven by his emotions, including his acts of physical violence and decision making.

Another big issue I had with the show was the guns blazing, gung-ho perspective Dal-Mi brought to the table, going so far as to quit her job in the pursuit of becoming a CEO with no proper business plan or formulated idea. This may sound like a compelling and romantic dream, but if their show is going to be based around business, then the writers could have made it a bit more realistic.

While the acting was phenomenal across the board, the poor writing negatively impacted Do-san’s character. Nam Joo-Hyuk’s performance was one of the few things that made the character likeable, since the writing made him out to be a terrible person. He lied, cheated and manipulated his way into his position and even lashed out and acted aggressively on multiple occasions. It isn’t helped by the fact that his “dream” changed midway to revolve around Dal-Mi, rather than his own aspirations.

Overall, the show was a disappointment. It did manage to create strong emotions and stakes in the beginning, but threw them out in order to pursue a more generic romance ending that really ruined it. While the show has strong actors, with lead Kim Seon-ho giving an excellent performance, it was affected most by its sub-par writing, with contradictions and irrational decisions making the show unbearable.