Softball player will continue career at Academy of Art 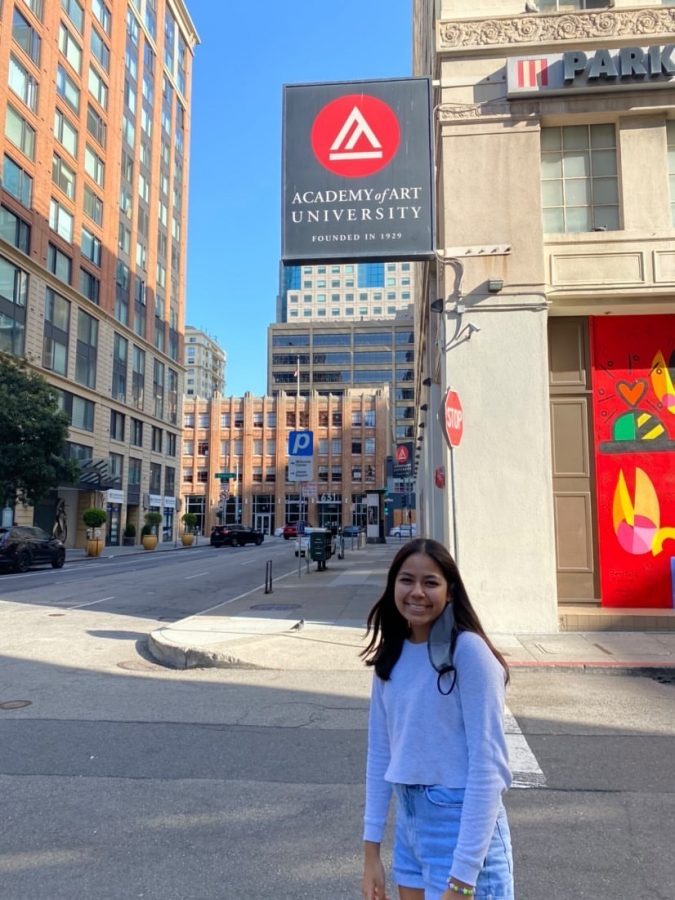 Sanchez cisited Academy of Art University in San Francisco prior to committing.

As a way to pursue her passions for both the arts and softball, Diamond Bar High School senior Carina Sanchez has committed to the Academy of Art University in San Francisco, and plans to play for their Division II softball team.

Sanchez has been on the DBHS varsity softball team for three years, last year  as a utility infielder. She had a batting average of .292 last season.

She realized she wanted to attend the Academy of Art University when she first visited the campus, and said she was especially grateful that she had the opportunity to tour the university in person since it allowed her to get acquainted with the environment and her potential future teammates. She officially committed to the school in September.

“It has always been my softball goal to play in NCAA Division II so when I found [the Art University], I was really interested,” Sanchez said via Zoom. “I’ve always wanted to go to college in the city and I’ve always loved San Francisco, so it was a great fit for me.”

“I’ve always been more in tone with my creative side so arts would be perfect for me,” Sanchez said. “It’s just a really niche school and it’s perfect for what I wanted to do.”

Sanchez has also been playing with the club team SoCal Choppers for three years, which she said has been an extremely positive experience that has allowed her to improve her skills. Whereas DBHS hasn’t started practicing for the 2021 season yet, she has already played with the SoCal Choppers.

Sanchez regards the two coach’s awards she received in her sophomore and junior year as her biggest personal achievements, as she said that they also reflect one’s character. She not only values being a good, reliable player, but also being someone that both her coaches, Ty Watkins and Kurt Davies, and players can look to and rely on for leadership. Sanchez said the most memorable experience she had with her team was attending the CIF playoffs in her sophomore year.

“I think personally the sport has given me so much,” Sanchez said. “I’ve faced a lot of adversaries and I’ve overcome obstacles, so I think that’s rewarding.”

To train for the new season, Sanchez has been working out and practicing daily by hitting and fielding, as well as focusing on  how to maintain a tough mentality. Sanchez is very excited to get back on the field, and hopes that she will get to play a softball season next year.

“Our coaches work so hard for us so I want to be able to help our team have a really successful season,” Sanchez said.

While Sanchez doesn’t plan on playing softball beyond college, she would like  to act as a mentor for future  players on the DBHS team. She said she wants to give back to the softball community by helping younger players realize the importance of having patience and a strong work ethic.

“I think it’s important to show the kids, the younger players, [that] there’s always a light at the end of the tunnel,” Sanchez said. “There are people that are handed opportunities, and it’s discouraging to see, but I think it’s really rewarding to know that you worked for everything you have.”