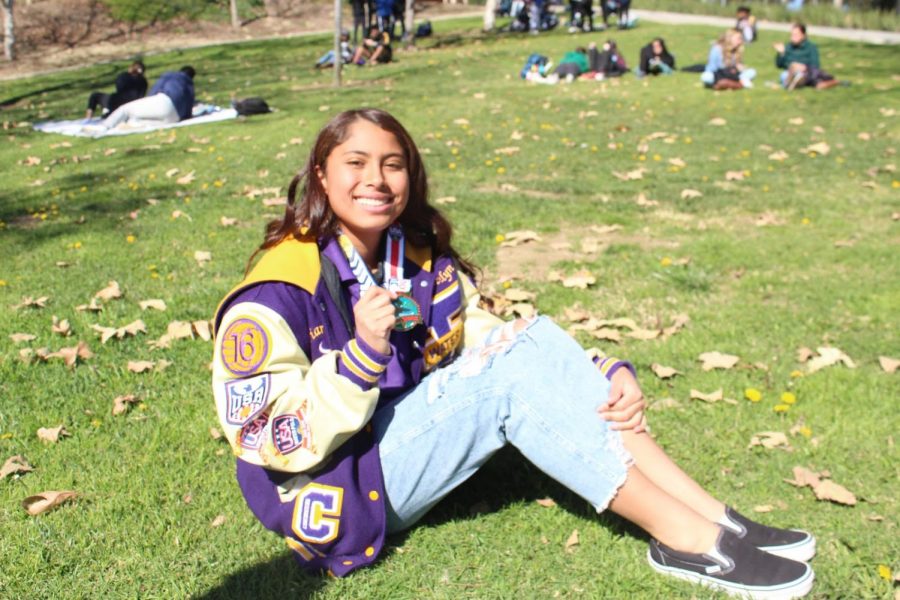 Senior Katelyn Arauz competed at the Junior Olympics and won a league title after starting water polo in 10th grade.

With no experience before playing for Diamond Bar High School, senior Katelyn Arauz found her passion for water polo during her sophomore year and has been dedicated to it ever since. She uses water polo as an escape from the school environment and academic work.

“I’m the kind of person who will just stress over my schoolwork if I don’t have something to do, and water polo has been a place where I can take time for myself without focusing on schoolwork so much,” Arauz said.

When looking for a sport to play at Diamond Bar, she decided to follow her older brother’s footsteps and join the water polo team. Even though at first Arauz had no knowledge of how to play the game, she made varsity since there were no tryouts at the time.

Along with playing for DBHS, Arauz also plays for a club team, the Chino Hills Aquatic Water Polo Club. She was introduced to the club by her coach Alexander Matal who suggested that those who wanted more of a challenge should join a club team.

The environment is very different, according to Arauz, who said that the coaches at DBHS are very motivational while those at the club who constantly yell at the players to motivate them to play better. When Arauz first joined, she was intimidated by the other players since she was just starting out with little experience.

“I was super nervous and scared because I had just started playing that year, so I think just learning to value my progression in such a short time and play with them allowed me to grow my confidence,” Arauz said.

Arauz has attended countless tournaments with the DBHS team and her club team. Individually, some of her awards and accomplishments include DBHS MVP in her frosh season, Offensive Player of the Year, Coach’s Award for DBHS and the USA All American Academic Award two years in a row for the Chino Hills club. She contributed to Diamond Bar’s semi-finals finish at CIF in 2018 and led the team to CIF for the past two seasons.

Arauz has also led the team to the Mt. Baldy League title this season. One of the biggest competitions she has attended was the Junior Olympics at San Jose in 2018.

“Overall it was such a great experience; we lost all three of our first few games which was disappointing but we started winning games and ended up getting first place in the bronze division by one point,” Arauz said.

However, the awards and medals aren’t Arauz’s favorite part about the sport.

She loves creating plays during the game, working with her team and scoring goals. Arauz said she has come to love the sport over the past three years and looking back on when she first started, a lot has changed for her.

“If I could give a piece of advice to my past self, I would tell her to stop worrying about how I’m playing or what other people think of me because I have grown so much in water polo,” Arauz said.

Water polo stands out among other sports for Arauz because not only do players have to swim the entire time but there’s also much physical contact that comes with the sport. Arauz injured her knee while playing and had to wear a brace for a month, during which she continued to practice and compete. Along with the physical aspect, players also have to strategize how to score goals during a game.

“I think it’s that three punch factor of swimming, physical contact and strategy that a lot of sports lack or don’t have,” Arauz said.

Arauz is planning to compete in water polo in college on either the school team or a club team close to campus.

Among the schools she is considering is Chapman University in Orange.