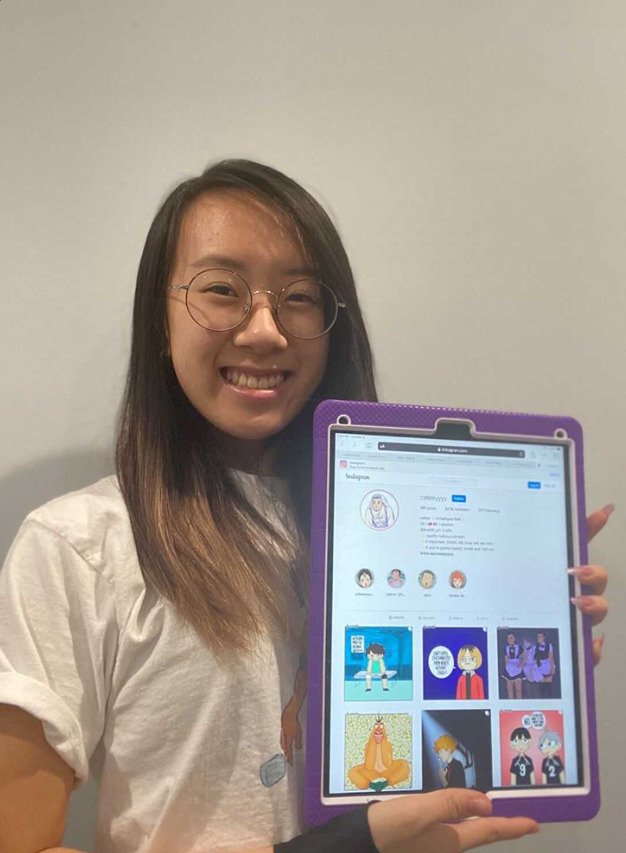 In July, after posting her first fan art for Haikyuu, a popular anime about a high school boy’s volleyball team, Diamond Bar High School senior Caitlin Lee has faced unexpected popularity on her Instagram art account, @cateeyyyy. She now has an active community of over 65,000 followers that continues to grow at an explosive rate.

Despite her success in the medium, Lee said that when she was very young, she did not have a strong interest in art.

“I took art classes in first grade briefly,” Lee said. “But I didn’t start drawing seriously until like the eighth grade.”

During that time, she enjoyed drawing only as a hobby and did not take art classes consistently. However, in eighth grade, her interest in art grew more thoughtful, and around the same time, she also started watching Haikyuu.

“I liked the level of character development in the show and the amount of detail that the creator put into character relationships,” Lee said.

She said that even though she started watching the anime four years ago, her interest grew during the quarantine, which is when she began to center her account around the show.

Although her art account has only recently grown in popularity, Lee actually made the account about three years ago, but did not post on it frequently.

Within a few weeks of posting her first artwork about Haikyuu, Lee said that her account started blowing up and she started to gather a small fan base.

The majority of posts consist of short comic strips in goofy interactions and situations that focus on characters’ lives outside of volleyball, such as being pulled over by cops or shopping at the store, a stark contrast to the sports-action anime. Lee uses her fan art to bring the characters’ personalities to life, rather than reiterating highlights of the anime and its storyline.

“I’m primarily known for my comic shorts,” Lee said via Instagram. “However, I do have a second, semi-realistic style for ship art [the romantic pairing of fictional characters], AUs [alternative universes], etc.”

This other style is more realistic, in contrast to her comic shorts which usually have them drawn in a cute, chibi-like style. Her secondary style usually features characters posed and dressed in everyday clothing rather than in volleyball gear.

In addition to her posts on Instagram, Lee said that she has been gaining a following on other social media platforms as well.

“I’ve also started trying to expand to other platforms, and I’ve seen success on Tik Tok,” Lee said. At the moment, Lee has 50,000 followers on Tik Tok (@cateeyyyy).

She said that due to her art’s newfound popularity, she has also received many business-related offers and has been able to profit off some of her work. So far she has done several paid partnerships and almost 50 commission orders for her fans.