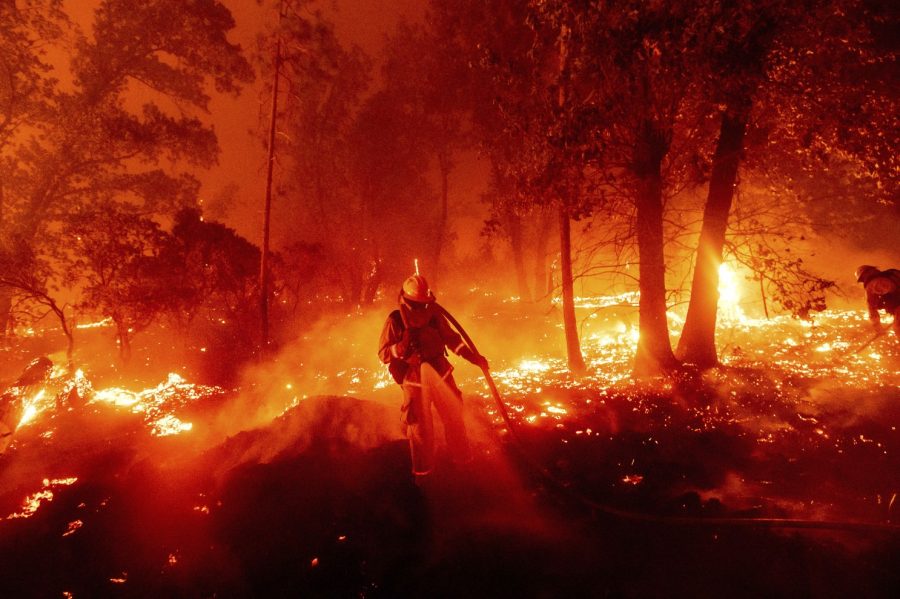 The West Coast is well known for its sunny weather, beautiful beaches and its tendency to catch on fire. This year is already the worst fire season on record with sweeping blazes across California, Washington and Oregon.

As of Oct. 11, there have been over 8,400 wildfires in California, according to the California Department of Forestry and Fire Protection. Since the beginning of this year,  over four million acres of the state have burned, resulting in  31 fatalities and 9,200 structures destroyed. The fires stretch from the Northern Bay Area to the area surrounding Los Angeles, with several fires along the Sierra Nevada mountains as well.

“We’ve broken almost every record there is to break,” climate scientist Daniel Swain said in a New York Times article regarding the fires.

The largest fire in California is the August Complex in Northern California, which was ignited by lightning strikes on Aug. 17 and has burned over 878,470 acres of land; so far it is only 45 percent contained. According to the New York Times, although many of the fires are a result of natural and human causes, outdated forest management practices and climate change are only fanning the flames of these vast fires.

One fire that has gone viral over social media is the El Dorado fire that was caused by a smoke device used in a gender reveal photo shoot, according to NBC Los Angeles. The flames took the life of firefighter Charles Morton and resulted in 13 injuries to other fire personnel and civilians. The fire started on Sept. 5 and is still actively burning, affecting the San Bernardino and Riverside counties.

Another human-caused fire affecting Riverside County is the Cherry Valley fire, which has also been called the Apple Fire. The fire was ignited by a vehicle’s tailpipe on July 31 and the fire is still active, Cal Fire officials have stated that it was the burning carbon from the exhaust system that lit the flame. So far the fire has burned over 30,000 acres of land.

Along the West Coast, millions of people have either been directly affected by the fires or fallen victim to the poor air quality caused by subsequent smoke and ash. Over the past few weeks, Diamond Bar residents have experienced orange skies, “raining” ash and smoke-polluted air. This was most likely an outcome of the Bobcat Fire which is currently active in Los Angeles County. The fire began on Sept. 6, but the cause of the fire is still unclear. ABC7 news states that the Southern California Edison company’s equipment may have started the fire and is currently under investigation.

It may seem that California is enduring the worst of the fires now, but as climatologist Bill Patzert told the Los Angeles Times, there are still two months left of this fire season. With an incoming heatwave and intense winds, new fires will ignite and preexisting ones that are nearly contained will be at risk of eruption.