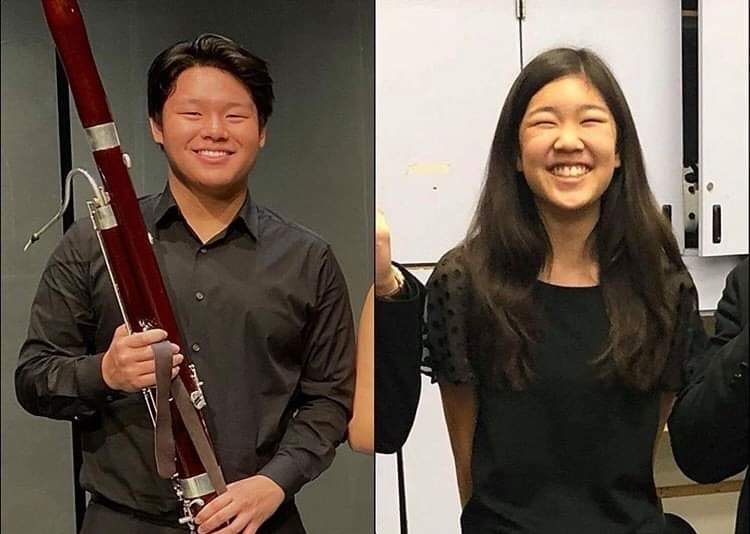 Continuing to honor their school through their music, three Diamond Bar High School Performing Arts Academy students secured positions in a prestigious orchestra and won both national and global competitions during quarantine.

Rising junior Erin Miyahara and rising senior Lawrence Wu were chosen to partake in the National Association for Music Education’s All-National Honor Ensembles. This organization’s ensembles are made up of the best high school musicians within the U.S.

“There’s always a rush when you open a letter or email about audition results,” Wu said via Messenger. “I felt both excited and anxious. It was really shocking for me to see the results, especially as I had kept a low expectation after submitting my audition.”

Miyahara had a similar reaction upon receiving news of her success.

“I was surprised because I didn’t think that I would be chosen,” she said via Messenger.

To be considered for the ensemble,  students had to record brief clips of themselves performing specific pieces chosen by the association. Following this, representatives from each state ranked their submissions. Every state had a limited number of students allowed to continue from each instrument category. From there, judges watched the ranked submissions and selected the top ranking musicians, balancing out the instrumentation for the ensemble.

Wu intends to utilize this unique experience by learning from fellow musicians to benefit his future in music.

“Most of the music events I’ve done have been somewhat local, and at most statewide,” he said. “I do look forward to broadening my horizons a bit and getting a fresh perspective on playing music. It’ll be interesting to see the differences in people’s approach to music from all different states.”

Miyahara, on the other hand, said she hopes to further her education in music with this achievement through new musical numbers and access to high-ranking instructors.

“I hope we get to play cool music and learn a lot from the conductors,” she said.

Although most competitive events have been closed or postponed due to quarantine, rising junior Andrew Shi was given the opportunity to compete in the Music Teachers’ Association of California’s music convention, which was held virtually.

For the competition, pianists were asked to submit videos of themselves performing their pieces, which were then judged and scored.

“The MTAC competition was similar to other competitions in that both required a lot of focus and preparation,” Shi said via email. “While some may think recordings are easier to do because of the ability to record multiple takes, it’s difficult to get a perfect recording that satisfies my wants. Hence, video recordings take the same focus and energy as live competitions, if not more.”

Besides the MTAC convention, Shi also participated in Enkor’s International Music competition and placed first in both events.

In the Enkor competition, jury members scored each contestant, with their final results being an average of the scores given by over 500 professional musicians.

“It [the scoring] is more transparent and less subject to one jury member’s prejudice,” Shi said. “It’s an interesting way to determine the winners, and I’m glad that so many other musicians around the world enjoyed my performance.”

Despite having the advantage of being able to do multiple takes, Shi said he had difficulty being confident in his submission.

“My biggest struggle was convincing myself that my recordings were well done,” he said. “At home, I have many chances to record a perfect recording, and hence, I’m always skeptical about the quality of my recordings.”

Beyond the obstacles he faced, Shi has learned to treasure his experiences at competitions and hopes to better himself as a musician.

“These competitions have been a huge encouragement to me,” he said. “Music is not only about competitions, but also about building character, making lifelong friendships, and most of all, sharing my creative and artistic ideas through music.”