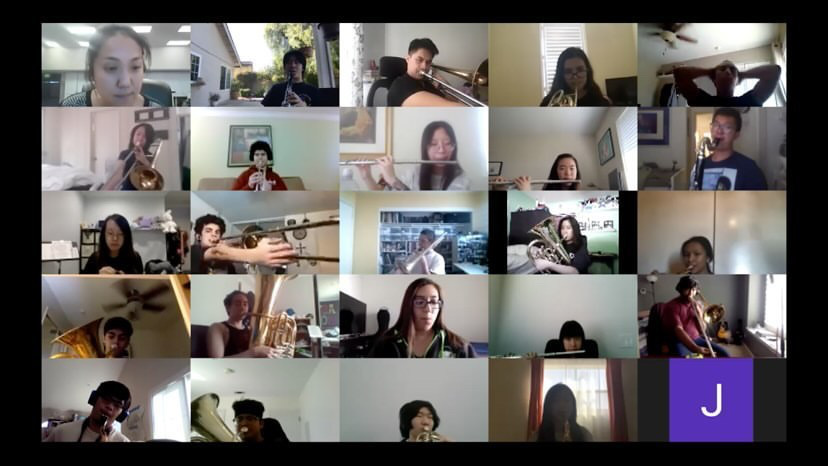 Amidst dozens of canceled events and activities, Diamond Bar High School’s music program hopes to organize a virtual winter concert. Despite technical difficulties and new restrictions arising every day, it was announced that the event will be performed on Dec. 16.

Due to technical complications with setting up the event, there was a possibility that the concert would have to be postponed until January. However, the planning was smoother than expected, and the concert is now set for December.

The virtual concert will be held with Symphony Orchestra, Wind Ensemble, the Thundering Herd Marching Band and the Advanced Music Program Chamber Groups via a livestream on Facebook and Youtube.

Plans for the concert include a performance by the Symphony Orchestra of “La Gazza Ladra Overture” by Gioachino Rossini along with a performance of Gustav Holst’s “Second Suite in F” by Wind Ensemble. There will also be a marching band performance of “Voice of the Guns” by Kenneth Alford. Lastly, Performing Arts Academy chamber groups will perform a few pieces of chamber music by Ludwig van Beethoven in celebration of his 250th birthday.

However, no group can perform together in full, either to record or stream, due to COVID-19 restrictions. Therefore, they must come up with a way to combine individual performances into a larger group.

“There are too many risks with wind instruments and the sizes of our ensembles for an in-person concert,” band vice president senior Yolanda Zheng said. “In regard to virtual concerts, the students and our faculty are working tirelessly on making it possible.”

Zheng named a few of the complications that organizers were working to overcome in order to pull off this collaborative concert.

“For instance, preparation in and of itself is difficult,” Zheng said via Instagram. “Not only do students have to record their parts individually, but putting all the parts together is extremely time-consuming.”

As a leader of band, Zheng has been helping streamline the recording process by approving videos that follow submission guidelines.

Although an in-person concert is off the table, some band members say they miss the atmosphere of such performances.

“Personally, I miss the live concerts because there’s something about sitting next to the people who you’ve worked with to get the music as good as possible that makes the concerts feel like the ultimate reward for our work,” band treasurer senior Ashwin Sanjaye said.

Sanjaye also mentioned another major issue with an online concert where groups cannot perform together: timing.

“The hardest part about these online concerts is recording the music instead of playing it live,” Sanjaye said via Instagram. “It’s difficult to get a sense of things like dynamics and such because we’re not in a room full of people, playing so that skews it too.”

Outside of logistics, the groups were also facing problems with communication. Senior Clare Choi, Symphony Orchestra president, added that it’s been harder to coordinate group efforts, even within symphony orchestra.

“[Communication] has been more difficult than it was last year for sure,” Choi said via Instagram. “For me, it’s been most difficult to communicate with all the section leaders because we usually discuss style and bowing in full rehearsals together.”