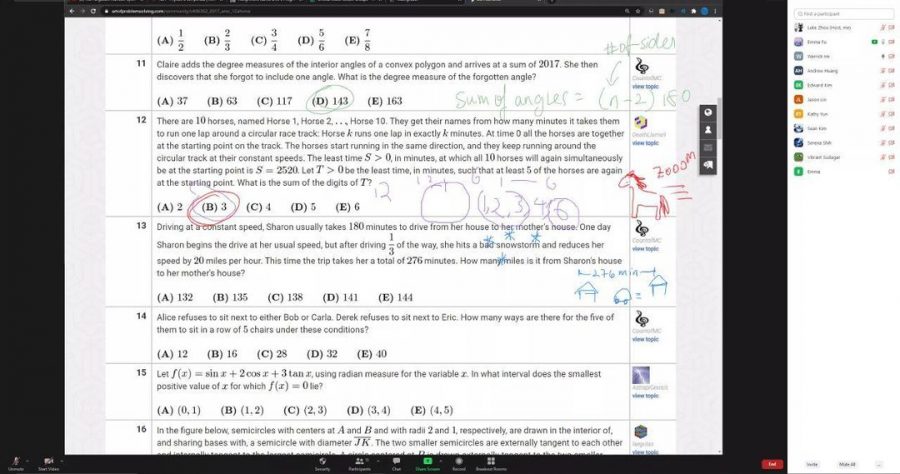 After ending its most recent season with a national rank of 17, the Diamond Bar High School Math Team is off to a strong start as they finish the preliminary rounds of the annual Math Madness competition.

With over 10,000 participants from 700 schools, Math Madness is a national team-based competitive event in which students are given 30 minutes to answer six to eight questions. The top five scores from the team are added together, becoming the final score that determines the victor of that round.

This year, matches are asynchronous, meaning that teams do not have to answer their questions at the same time. They do have to abide by the time limit, however.

Despite these and other changes, the Brahmas opened the season with a win, defeating Hononegah High from Illinois with a score of 39-26. They then entered the first collaborative round, where students work in groups of two to answer the set of questions, securing a win on Oct 14 against Moravian Academy, 40-28.

The Brahmas steadily gained wins throughout the initial rounds despite a close 27-20 against Rochelle Zell Jewish High School on Oct. 21.

Entering the ranked competition rounds on Oct 28, the Brahmas won a tight competition against Glenbrook South High School of Illinis 37-34, putting them at 30th in the nation. Leading the Brahmas to their first round victory are senior team president Warrick He and sophomore Jason Kim, scoring a perfect 8.

Like many other extracurriculars and academic events, this year’s competition is being conducted over Zoom, which has been filled with technical issues. Advisers Jeff Brose and Dena Lordi, however, see these complications as only a minor setback.

“We really benefit from having a lot of team members, so if we lost someone due to a technical problem, we have people to step up,” Lordi said via email.

Technological issues aside, one aspect that the team has struggled with–especially in the past two rounds of collaborative competition–is maintaining effective communication under virtual circumstances.

“For team competitions, it’s harder since there’s a lot that can’t be communicated easily with just words,” team president, senior Warrick He, said.

Nevertheless, the team has remained consistent in its efforts as students prepare themselves just as they did in previous years. Team officers have also dedicated themselves to promoting team spirit among new and old members.

“Our greatest strength is that we are a team,” Lordi said. “Our students enjoy working together; it’s a very positive environment.”

Though the season has just started, Lordi has high hopes for the Math Team as well as its future competitions. She plans to use this time to strengthen the team in terms of quality and representation.

“My hope is that more students from all sorts of backgrounds embrace the idea that challenge is good and fun,” Lordi said. “And that they can still be successful with a little teamwork and a lot of practice.”

Their next competition will be on November 11.