Mastering his passion for taekwondo 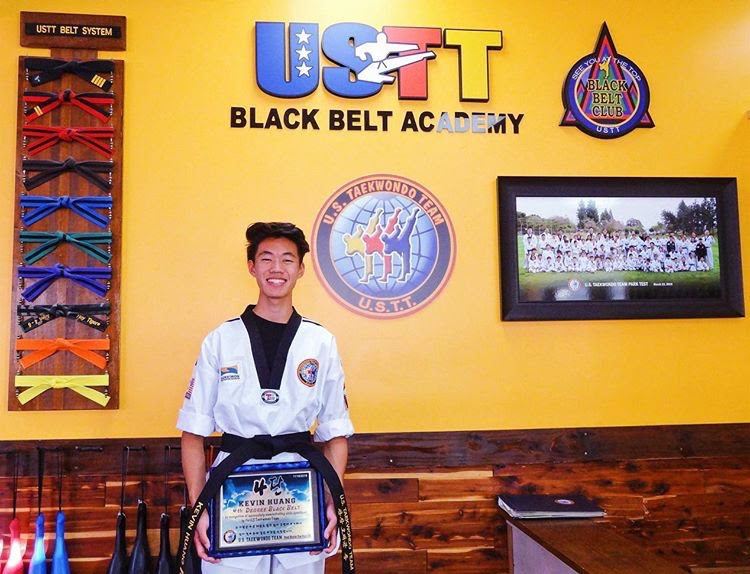 Senior Kevin Huang has competed in taekwondo since he was six years old.

While kicking targets and breaking wooden boards with a series of flashy techniques, senior Kevin Huang fell in love with the discipline of taekwondo at the age of six. However, the 11-year martial arts veteran never thought of obtaining the Sa Dan rank: the fourth-degree black belt.

“It was my first activity and club that I had ever joined,” Huang said. “My parents, but more so my friends, introduced me to the sport and I just stuck with it ever since.”

In Huang’s dojang, or taekwondo training studio, the fourth-degree black belt is considered to be a master’s rank, allowing the recipient to formally teach those who have belts more novice. The test to achieve this prestigious status is extremely difficult, according to Huang, featuring the demonstration of all basic poomsae, which are defined patterns of defense and attack motions, and the instruction of other students for 40 hours. The senior completed this insurmountable task on Nov. 16.

“At first I honestly thought that it was just another basic test but when I was actually there, I was very nervous,” Huang said. “My grandmaster already had great expectations for me, but used me as a demo for the audience which made it even more nerve-wracking.”

Though Huang enjoys taekwondo now, he started martial arts because of his unsettling childhood experiences in the Rowland Unified School District. While attending Blanford Elementary School, Huang was bullied and found taekwondo as an escape from his conflicts.

“I really didn’t know any self-defense [to protect myself] back then,” Huang said. “So I began just kicking or jumping around when I was a kid; as I got older, I really enjoyed the new techniques that were taught by my new masters.”

According to Huang, he developed an attachment to the sport because of sparring, a one-on-one matchup featuring the display of learned martial arts techniques in a controlled setting. The senior used the simulated fighting environment to release psychological stress without bad intentions.

“Although fighting another person isn’t the best way to release stress, it’s relieving knowing that I’m not hurting anyone because we have gear on and so it reduces the physical impact on the person,” Huang said.

In the more advanced stages of the taekwondo curriculum, Huang primarily relished the aspect of tricking, a creative arsenal of dazzling kicking movements that deviate from the normal front or roundhouse kicks.

“I do more 540 kicks, where you spin 540 degrees in the air and kick before you land; it’s really satisfying just to go through that motion,” Huang said.

The senior has also participated in an annual tournament where individuals, placed in groups of three based upon belt color, are assigned rankings and awarded medals based on their performances in bothw sparring and poomsae.

“Competitions for sparring is always the hardest because you’re fighting with someone you don’t really know because they’re people from other states,” Huang said. “And because I’m not the fittest person, I usually get someone bigger put up against me; so there’s always that fear of getting hurt but I gradually got over it. But in forms, I got first place and received a perfect score on one of my competitions.”

Although the senior has many regional and state accolades, Huang avoids participating in prestigious international competitions due to a wide variety of safety reasons.

“Those competitions are really violent and competitive as well,” Huang said. “There has been incidents where participants have actually died during those [sparring] matches, and so my masters aren’t comfortable sending me out to those events.”

With all this experience under his belt, Huang struggled to reach the Sa Dan rank in order to finish something he had started, feeling a sense of satisfaction after reaching his end goal.

Moreover, he always had an affinity for developing relationships with his instructors, wanting to obtain the master rank in order to serve as an inspiration for younger martial artists.

“Since I joined the Boy Scouts, I learned to teach other younger scouts; I felt like if I had this fourth-degree black belt, I would be able to teach younger students, which is something I enjoy to do,” Huang said. “I enjoy interacting with kids so much, and so it might help me start my own club or help other studios and all that.”

Although Huang isn’t going to travel, he is willing to continue the sport in the near future.

“Honestly, if my masters offered me to come back to just instruct the students, I would love to come back if I had the time,” Huang said.