Making baked goods for a purpose 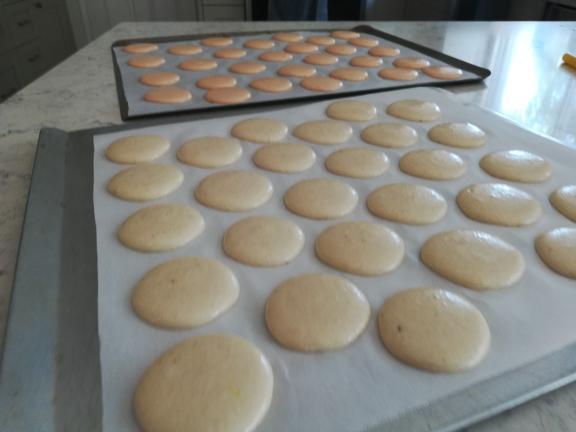 Though it may be impossible to deny the quality of store-bought confections, there is  something about the nostalgic taste of homemade treats that brings a special kind of joy.

Senior Karissa Wong said she enjoyed baking pastries with her mother so much that in 8th grade she began making macarons on her own. Over the past summer, Wong started baking again and opened her own virtual business.

“I was craving some macarons one day and decided to bake just for the heck of it,” Wong said.

She began her business by selling them on her personal Instagram account, and later set up a separate account, @macawongs, when she couldn’t work at her regular job at Chick-fil-A  due to the coronavirus.

“I did this in the last year of middle school I think, and it makes a good amount of money,” Wong said. “I just have to be more uptight with food handling [now] so that people will feel safe buying them from me.”

Her favorite part of baking is piping the macaron batter on the baking sheets. She said she finds it  fun and satisfying. The flavors she offers include yakult, coffee, blueberry and vanilla, but she is also open to ideas from customers for new flavors.

Wong said she usually takes orders the weekend before she bakes so that they can be picked up between Saturday and Monday. She also mentioned that she gives discounts to customers when she feels that the macarons she makes aren’t up to her visual standards, and when buyers help her advertise on their social media accounts.

“I just reshare a macaron post on my main Instagram and encourage people who purchased them to do the same,” Wong said. “They get a 5 percent discount toward their next order.”

Part of her proceeds are sent to charity, and 30 percent of her profits are sent to the JED foundation, an organization that aims to provide mental health support for teens and young adults. She contributes to charity efforts because she is passionate about mental health awareness and was inspired by the efforts she saw during September, which is National Suicide Awareness Month.

Sophomores Julienne Uy and Catherine Wang also started their business as a way to share something they were passionate about, as well as make some money. Uy and Wang took up baking last year and donated to charity from their virtual bakeshop, @j.cbakery.

“We donate to the Endangered Species club and [the] WWF because we have a passion for animals and want to support our community as much as possible,” Uy said.

Uy and Wang give 20 percent of their profits to the Endangered Species club at Diamond Bar High School and have been able to raise about $50 total for both charities.