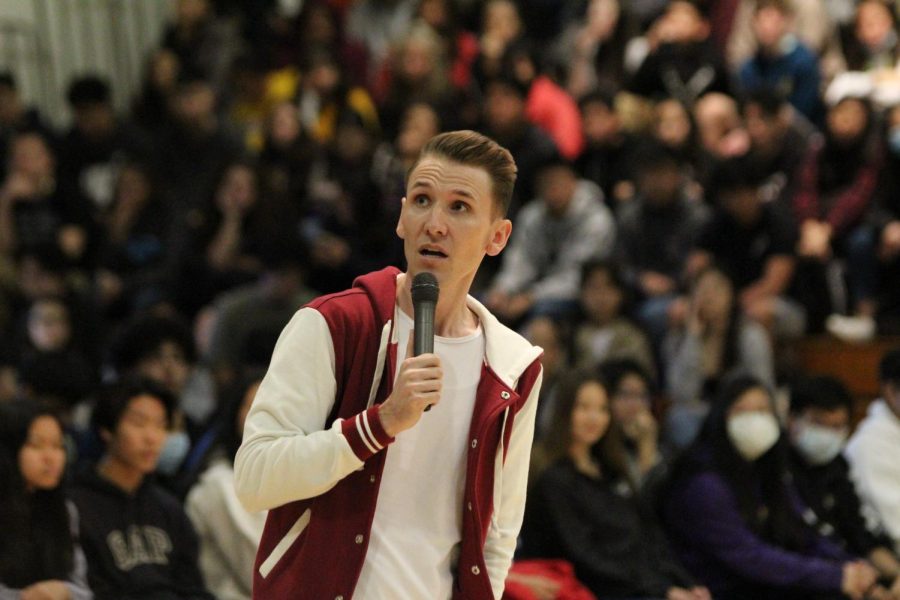 For 14 years, youth motivational speaker Scott Backovich has dedicated his time to both showing and  spreading kindness, while motivating others to do the same. He shared his experiences with Diamond Bar High School students at the Kindness Week assembly on Jan. 28.

After starting his 40-minute speech on a light-hearted note, Backovich changed the assembly’s atmosphere with a retelling of his encounter with a young boy attempting to sell candy.

“As I’m walking 11 hours later, the same exact hallway, out of the corner of my eye I spot a little kid,” he said. “The same kid from before with candy, so [I say] ‘You know what, forget it, I’m starving.’”

Backovich recounted how the child was shocked that he even stopped to consider buying chocolate from him.

“Out of 10,000 people, only 30 people needed to buy a $2 candy bar for this guy to get on the baseball team. [He needed money for the uniform.] Out of these people, not a single human being decided to even acknowledge him,” he said

After this, much of the audience was  silent, and the only audible sounds were of some  sniffling or crying.

Backovich, pacing back and forth across the middle of the gym floor,  continued his speech with a completely different tone. He described the time he discovered his father had a brain tumor. After his father  passed, Backovich said his most prized possession was the last voicemail from him even though it consisted of only a few words.

Backovich’s last story was about how he was speaking at a school, and at the end, he was to take a photo with the students. However, he noticed a young girl who had no friends to be with in a photo, and she was crying alone in the corner.

“She told me, ‘Scott, I’ve known these kids forever, and I still don’t have a single friend I can stand next to.’ “

However, a random boy, who had no idea who she was decided to show her some sympathy. He gave her a simple lanyard and told her that he would be her first friend.

“This boy. I’ve been traveling for years and years and he realized something I never had, and that’s this: when you give people whatever you have, no matter how small it is, you give them hope.”

Backovich closed his speech by emphasizing his message about the importance of showing kindness to others.

“When you give what you have, even if it’s a small thing, you give people hope.”