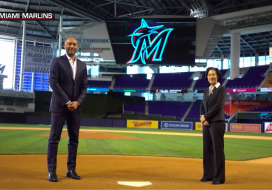 With a list of credentials stretching almost as far back as her love for baseball, Kim Ng was hired as the new general manager for the Miami Marlins on Nov. 13, the first female and East Asian to hold that position for any major American men’s sports team.

Dating back to her early childhood in Queens, Ng grew up playing and learning about sports from her father. Partaking in multiple sports throughout high school, she went on to play softball at the University of Chicago while majoring in public policy. It was when she was hired directly from college as a paid intern for the Chicago White Sox in 1990 that her steady climb to the top began.

Working her way up to assistant director during her time with the White Sox, she was soon offered a job with the New York Yankees, hitting her first milestone at age 29 by becoming the youngest assistant general manager in her field. She later served in the same position with the Dodgers, and has directed international operations as the senior vice president of baseball operations for MLB since 2011.

“Obviously, over the last 10 years in terms of interviewing for the general manager’s jobs, it hasn’t come to fruition until now,” Ng told ESPN. “It’s a tribute to the idea that you just have to keep plowing through. That’s what this is. It’s like what you tell the players. You can go mope and sulk for a few days, but that’s it. Then you have to come back. That’s what I’ve been able to do and, yes, I’ve been defeated and deflated numerous times, but you always keep hoping.”

With over 30 years of experience under her belt, Ng, 51, has more than paid her dues to obtain the position she now holds today. Ng’s path to success was most definitely not an easy one, as she was turned down over five times for a general manager’s job within the last 15 years according to NBC News. Despite this, Ng never lost faith in her goals and exhibits the importance of pursuing one’s dreams through perseverance and unwavering hope.

After the announcement, she was showered with congratulatory messages from thousands across the country, from her childhood idol tennis player Billie Jean King to former first lady Michelle Obama.

“We look forward to Kim bringing a wealth of knowledge and championship-level experience to the Miami Marlins,” Marlins CEO Derek Jeter said in a statement. “Her leadership of our baseball operations team will play a major role on our path toward sustained success. Additionally, her extensive work in expanding youth baseball and softball initiatives will enhance our efforts to grow the game among our local youth as we continue to make a positive impact on the community.”

A trailblazer for a future geared toward gender equality and minority representation, Ng now sets sight on a championship for Miami in 2021.

“This challenge is one I don’t take lightly,” Ng told Forbes magazine. “My goal is now to bring championship baseball to Miami. I am both humbled and eager to continue building the winning culture our fans expect and deserve.”