Her brand on denim 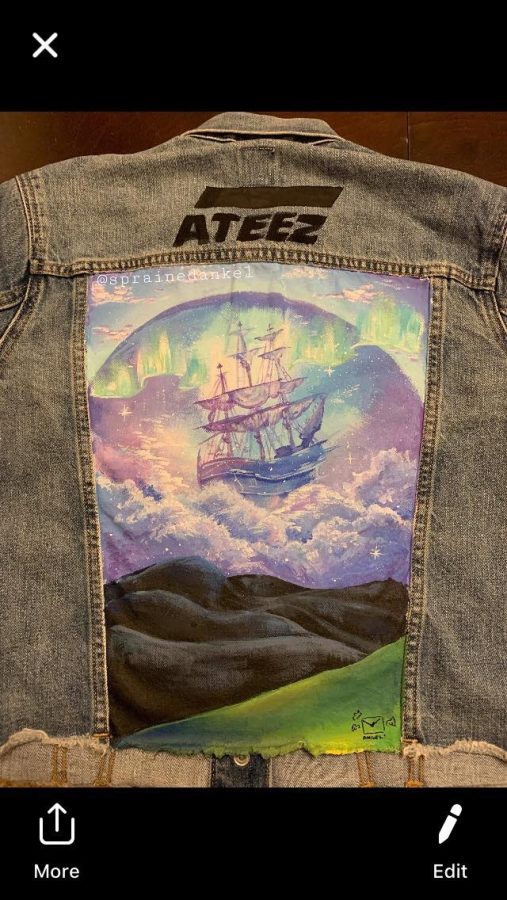 Angel Zeng’s jacket painting empire emerged after she made a jacket to wear at her very first K-CON convention. The joy of wearing something she drew and designed has encouraged her to turn  jackets into art.

“I had wanted to do something special since it was my first time ever actually going to a K-pop concert and I thought it would be cool if I wore something I made,” the Diamond Bar High School sophomore said via Messenger.

Zeng has sold her jackets to a few  notable figures, including Hong Joong from the group Ateez, Kyla Massie from Pristin and a stylist from the company KQ.

In addition, Zeng  schedules meet ups with customers at K-pop concerts to sell her jackets.

Zeng starts off the process by buying denim jackets in bulk to cut down on costs. She then washes and organizes the jackets by size. This allows Zeng to start designing a jacket after an order without worrying about minute details.

Most of Zeng’s designs are inspired by K-pop, including  albums covers or  designs  in a music video.

“I make a blueprint of the entire jacket … and then afterwards, I just freehand everything else onto the jacket,” Zeng said. “I use acrylics from Walmart and something called tempera which is a textile medium.”

For the final step, Zeng runs an iron over the jacket to heat seal the paint. The entire process of creating a jacket takes 16 to 20 hours.

After the final product is complete, Zeng posts the jackets on social media, Ebay and A Bay, where she sells them for $120 to $300.

Zeng finds the jacket making and selling process as a whole extremely fulfilling, especially after seeing the fruits of her labor immortalized on a jacket.

“It’s satisfying to see something you designed come to life on a canvas, so I love the painting and the designing,” Zeng said.

“The process is very therapeutic to me and I use it as a way to relax.”

Zeng is  gradually expanding her K-pop jacket business by painting on other clothing items.

“I’ve started painting on a pair of Vans and I’ve painted on jeans, shorts and I’m going to try to do a leather jacket,” Zeng said.

“It depends, if like a client wants it then I can provide.”

Seeking to expand her brand, Zeng is working on starting up her own website, which she  expects  to  launch in a couple of months.