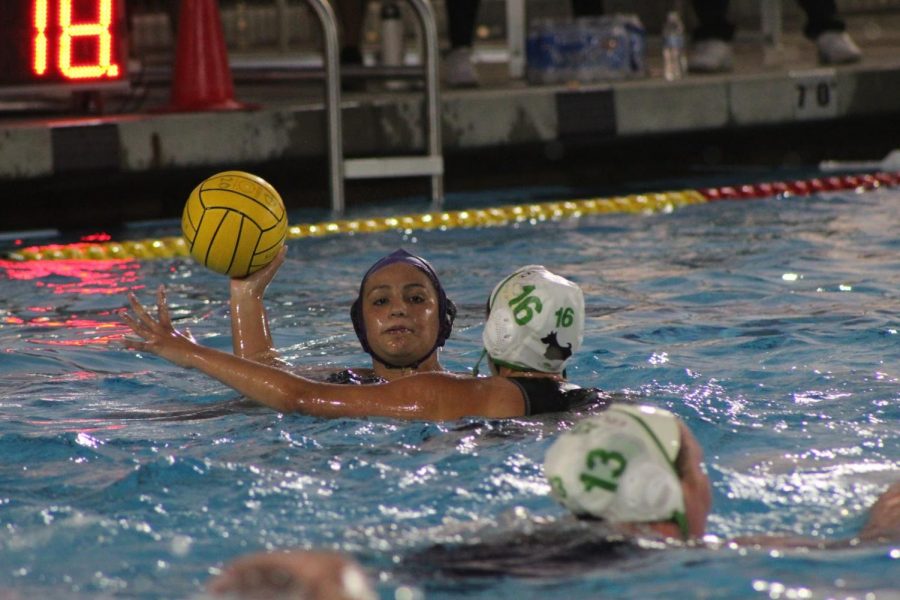 Senior Kaylee Robles handles the ball in round one of CIF; which the Brahmas won 7-5 against Upland.

Last year, Diamond Bar girls water polo had to settle with tying  Montclair for the Mt. Baldy League title and ending their season in round one of CIF. This year’s  team has surpassed last year’s achievements and ended their season in the second round of CIF losing 11-7 to Burbank.

“I felt so glad and relieved we won,” senior Katelyn Arauz  said. “I personally felt I did not play the best that I could because I was a little bit nervous having lost the first round last year…but I was so happy that we were able to pull through and get the win.”

On Feb. 11, the Brahmas went up against Upland in the first CIF match and won 7-5 after being tied 5-5 in the third quarter.  The team’s goalie, senior Victoria Condon, showed impressive defense against Upland’s shots. Also, freshman Julianna Longoria had many assists primarily to Arauz, who has helped carry the team the entire season.

“So I hope we can make it past the first one and hopefully to the second round because I know we can get pretty far from what we have already accomplished this season,” junior Marisa Ruiz said before the contest.

In their last league game against Don Lugo, the Brahmas won 15-3. During the game, Arauz broke the school record of most points  in a game by making 10 goals. Arauz previously came close to breaking the record earlier this season, missing by only two points.

“It felt great, but it was kind of nerve-racking since [scoring] 10 goals doesn’t sound like a lot but it’s actually really hard,” Arauz said.

Besides the team’s latest win, the girls have had other victories, including beating Montclair 11-5. Since Diamond Bar was already undefeated and won by a large point gap when going up against schools like Don Lugo or Chaffey, Montclair was the only team in the Brahmas’ way to win the league title. The Cavaliers previously tied with DBHS last season and were considered this year’s biggest rival for the Brahmas.

“We had already known that we’re going to win it either way, because like we had played Don Lugo and we knew that we were the better team,” Arauz said. “Technically, if we lost that game, we still would have won the league because we already beat Montclair.”