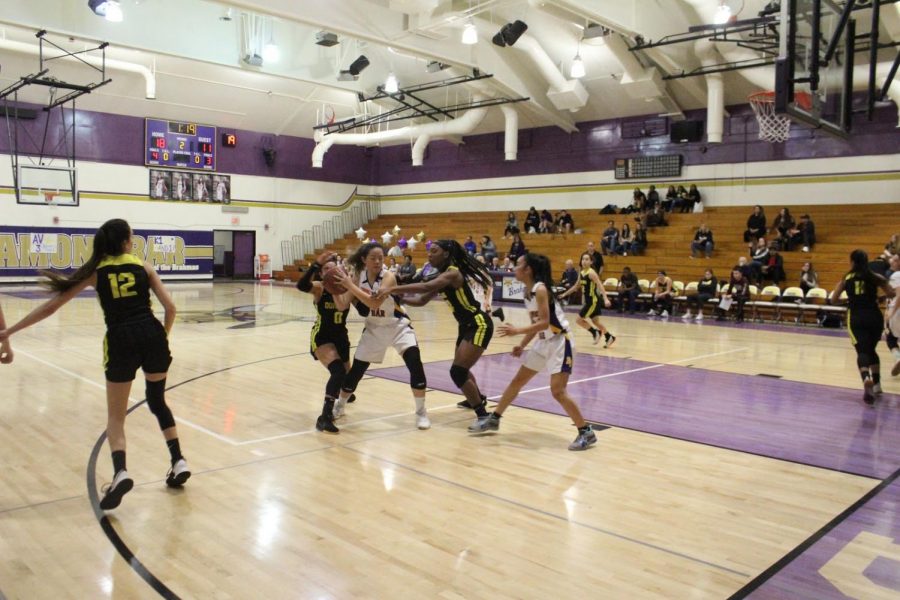 Making the final shots of the season, Diamond Bar High School girls basketball finished fourth in the Mt. Baldy League with a 3-6 record, failing to qualify for CIF playoffs.

Though the ladies may have not met their goals, the second half of the season was filled with improvements and stronger communication.

In the final games of the season, the Lady Brahmas lost against Montclair, 62-53, and Chino, 52-39, but defeated Ontario 57-29. Senior night against league champ Don Lugo, however, showed indications that the team had improved.

After losing to Don Lugo by a 40-point margin earlier in the season, the Brahmas came back stronger the second time as Don Lugo edged Diamond Bar in overtime, 44-39. The Brahmas took an early  lead after senior Amanda Vasquez hit two long threes, making the score 6-0. Continuing to hit threes and playing strong defense, the ladies managed to obtain a lead.

In the second half, the Conquistadors fought back harder, equating the playing field during the second half to a 34-32 lead. With eight seconds left in the game, senior Karen Shao, after being fouled twice, made two free throws to tie the game and force the game into overtime, where the Brahmas eventually lost.

“We were even and got going the entire game but, as champs do, they fought back hard and made great plays,” McCabe said. “They beat you in a close game or they lose in a close game; overall, it was a fantastic show.”

The strength of the team, beyond consecutive practices and dedicated players, was the strong leadership found in senior captains Shao, Vasquez, Juliana Callasan and Charlotte Tu.

“I’ve always thought that team captains, especially seniors, are in charge of the environment of the team as much or more than the coach because they’re there,” McCabe said.  “It’s not that they’re perfect, but the other kids watch and if they do what they do, it should all be great.”

Though replacing the leaders may be hard, according to McCabe, the underclassmen on this seasons team, especially the freshmen, bring a new level of athleticism that will be necessary as the Brahmas switch to the Hacienda League next season.

With  Diamond Bar moving  into the Hacienda League next year, joining schools  Walnut, Wilson, South Hills and Rowland Heights, McCabe hopes it will  ignite the old rivalries that will pack the gyms with huge crowds.

“It’s not that we don’t like you, we just want you to lose all your games,” McCabe said. “Rivals just make the whole game more exciting and take it to a whole other level.”

Despite the season concluding with a poor record, McCabe was pleased by the improvements made by the Lady Brahmas throughout the season compared to their staus at the beginning.

“When you lose by 50 or 40 and you have to get up, you almost have that beat, and it just shows heart,” McCabe said.