Dress to kill the planet 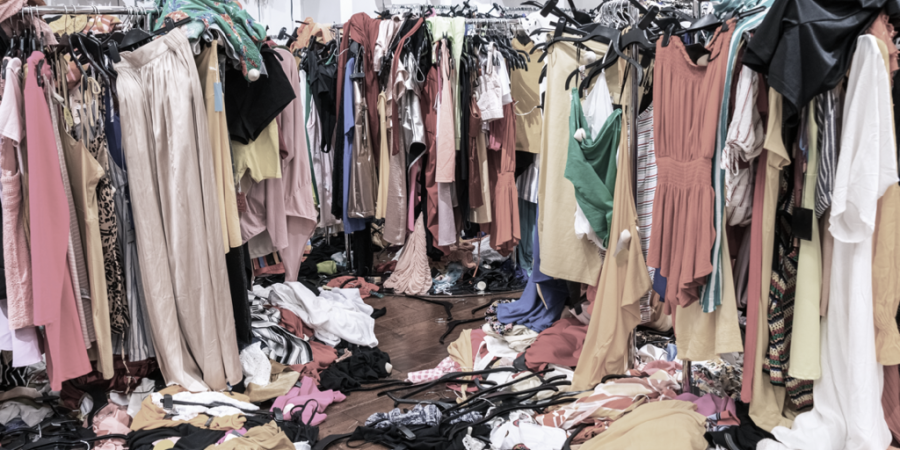 From Brandy Melville to Forever 21, there’s an endless supply of fast fashion companies producing the newest clothing trends in mass quantities faster than ever. As tempting as it sounds to buy something new for a cheap price, the production of fast fashion is both unsustainable and unethical due to the detrimental effects it has on the environment, and the use of cheap labor in third world countries.

The term “fast fashion” refers to the production of fashionable and inexpensive clothing items. However, its cheap quality means that the clothing tends to fall apart quickly and may need to be replaced, contributing to the never-ending cycle of consumerism as customers feel compelled to buy more. Popular fast fashion brands include Zara, Urban Outfitters and even stores such as Walmart and Target. In addition, fast fashion brands have sometimes stolen designs from both high-profile brands and smaller creators, so many of the products they list have a tendency to look unauthentic and unoriginal.

Since fast fashion companies create clothing that is inexpensive and trendy, this can be highly appealing to customers who don’t want to spend a lot of money on clothes. However, carelessly buying piece after piece of the latest fashion fads comes with dangerous environmental costs.

It’s surprising that limiting the production of fast fashion is not the first thing that comes to mind when discussing how to lead a more environmentally conscious lifestyle. For example, washing clothing in general sends 50,000 microplastics in the sea, according to Business Outsider, and since fast fashion retailers often sell clothes made from polyester that don’t break down easily in the water, the microplastics in the fabric emit greenhouse gasses that contribute to carbon emissions. While some people may not be aware that fast fashion has such negative environmental effects, others just do not care, which is both embarrassing and alarming. If the Earth decays, so will you and your $5 crop top from Forever 21.

In addition, clothing is produced in inhumane conditions. One big reason fast fashion is so inexpensive is because of its exploitation of workers in Third World countries for labor. Factory workers work long and tiring hours only to be met with lack of monetary compensation and, at times, abuse.

Oxfam Australia, a non-profit organization that works to end injustice, wrote a story about a factory worker in Bangladesh named Chameli, who described how she worked 11 hours a day only to get paid $128 by the end of the month. Factory supervisors even admitted to verbally abusing their employees in order to get work done quicker, and reported that they were “allowed to beat or physically abuse” the employees if they thought it was necessary. Abusing company workers in any shape or form is already cruel enough, but, when workers aren’t even paid a living wage, this cruelty transforms into something similar to absurdity.

There are many alternatives to buying from fast fashion retailers, with the most popular and inexpensive one being thrifting.

While some people insist you could potentially buy away clothes from those who shop at thrift stores for financial reasons, only 20 percent of donated clothing makes it to thrift stores. Even if thrifting did become more mainstream, the percentage of clothing being donated to actual thrift stores would increase, which means that those who financially depend on buying from thrift stores shouldn’t have to worry about new customers buying clothes away. This is highly beneficial, seeing as there would be more sustainable clothing options available for purchase that more people can buy.

Even though fast fashion may seem like the best way to buy clothing on a budget, purchasing from second hand shops is ultimately the best decision you could make as it keeps clothing out of landfills and halts the process of unfair and demanding labor as fast fashion companies wouldn’t have a reason to keep producing clothing no one is going to buy.