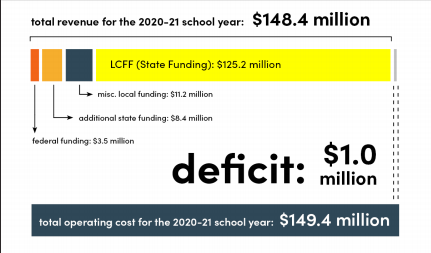 The ongoing COVID-19 pandemic has impacted Walnut Valley Unified School District, exacerbating its financial plight and increasing the possibility that cuts will be made to this school year’s budget.

WVUSD serves roughly 13,500 students enrolled in nine elementary schools, three middle schools, two high schools and one Alternative Education program. The district began the 2020-21 school year with $32.4 million in reserve, but projects a 3 percent reduction to $31.3 million by the end of the year. For comparison, the school district started the 2019-20 school year with a balance of $29.8 million and ended the year with $29.5 million, a 1 percent decrease.

According to public budget documents, the cause of such drastic losses rests mainly in decreasing enrollment, state-wide budget cuts and steadily rising costs.

The school district estimates enrollment at 13,547 students for the 2020-21 school year. This 10 percent decrease in enrollment compared to a decade ago is largely attributed to the capping of District of Choice applications.

“At least 95 percent of the school districts out there experience declining enrollment and that’s because there are just fewer students in public schools right now than ever before and that number continues to drop,” Assistant Superintendent of Business Services Matt Torres said.

In addition, Prop. 98, a formula for finding minimum annual funding for K-12 schools based on the overall state budget, has allotted just $70.5 billion for this school year compared to $77.4 billion last year.

“When the state economy shrinks, the state budgets shrink, then sometimes, school districts feel the brunt of that and have to be hit with less revenue coming in from the state than anticipated,” Superintendent Robert Taylor said.

Such reductions are seen as unavoidable as the pandemic continues to take a toll on the economy. However, a financial aid package from the federal government could increase educational funding and minimize the impact of the fiscal deficit.

“Typically, we adopt a budget based on what we think the projections are going to be and it’s normally right in line with what the state adopts as their own budget,” Torres said. “After we adopted our budget, the state came out and adopted a completely different budget and that… changed our projections for the better.”

The primary source of revenue for WVUSD will be the Local Control Funding Formula, which allocates between $7,830 and $8,813 per student per year, depending on grade level.

“Our district is one of the lowest funded school districts in the state due to the Local Control Funding Formula and our demographics,” Taylor said.

Federal sources such as the General Fund will also contribute $3.5 million through grants and entitlements. In addition, California provides $8.4 million to WVUSD for special programs, with $1.1 million earmarked for the Mental Health, Workability and Pathways programs.

“Unfortunately, creating or increasing revenue isn’t easy for school districts. We get our money from the government and it’s difficult to have them increase money for us,” Torres said.

Local revenue from miscellaneous sources also adds another $11.2 million to the district budget, with $9.4 million set aside for Special Education.

In total, this adds up to $148.4 million in revenue. On the other hand, WVUSD estimates $149.4 million in expenditures this year, creating a $1 million deficit.

“Currently, a $1 million deficit for a district our size is actually pretty small, so we’re pretty pleased with where we’re at right now and happy that the state has made some adjustments,” Torres said.

The bulk of the expenses lie in salaries and employee benefits, which make up 87.3 percent of all projected spending. The majority of the remainder is allocated to supplies, services and operating expenses.

“At this time, we’re not certain how deep or necessary any budget cuts are,” Torres said. “We don’t necessarily target one or two schools to take the brunt of all those reductions, we try to spread that out across the district.”

Taylor also mentioned that a small budgetary deficit of $1 million can be made up with reductions in operational services such as energy costs.