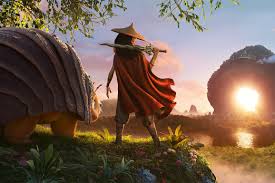 While it appeared that Disney had learned how to properly implement ethnic representation into its films after the release of “Coco” and “Moana”—neither of which were perfect, but a step in the right direction—more recent movies like the live-action “Aladdin” and “Mulan” proved otherwise, leaving me wary of the media giant’s latest announcement: “Raya and the Last Dragon.”

The film is set in a fictional land called Kamundra, which is said to draw inspiration from countries all across Southeast Asia. Clumping together different cultures from within a region, while not ideal, is excusable when done well. “Moana” and “Coco” are examples of this, although they blended few cultures .

However, the last time Disney grouped countries together to the same extent as “Raya” is expected to, we got “Aladdin,” which was, to put it simply, a racist movie. Both the animated and live-action versions of “Aladdin” are soaked with antiquated Orientalism, exoticism and racist stereotypes. Worst of all, the film brazenly amalgamates Middle Eastern and South Asian countries, which distinctly constitute two separate cultural realms: Islamic and Indic.

Then again, Orientalism has survived—thrived, even—so long because of its reliance on revisionist history that blurs a vast spectrum of ethnicities, languages and cultures into a simple, easily-digestible blob. Centuries of Orientalism have continued to push this narrative to the point where Asia is now an enigma to the majority of white Americans. When it comes to Southeast and East Asia, the distinct cultural realms that “Raya” could potentially and mistakenly blend, current mainstream American media represents the same ignorance, in no small part due to the same Orientalism that plagued “Aladdin.” The sad truth is that unless minority groups settle for a narrative that they often have no control over, they run the risk of losing what little progress they’ve made in media representation.

This is both insulting and troubling; when we allow ourselves to be represented through this imperialist-era lens, we open the door to real-world marginalization. Southeast Asia’s own history with colonialism is particularly bitter; all the more reason to tread carefully.

Despite all my misgivings, I am uncharacteristically hopeful. Unlike “Aladdin” and “Mulan,” “Raya and the Last Dragon” is set to have Southeast Asian talent in the directing, writing and producing chairs, beyond just an ethnic cast for Disney to hide behind. Should the film stick purely to its Southeast Asian inspiration and not insensitively blur it with East Asian culture, which is already exploited far too much in America, and respect the individual cultures it draws from, there’s a chance that it won’t be particularly problematic. It’s only disappointing how low the bar is for Disney, who has no excuse to continue making these kinds of mistakes.