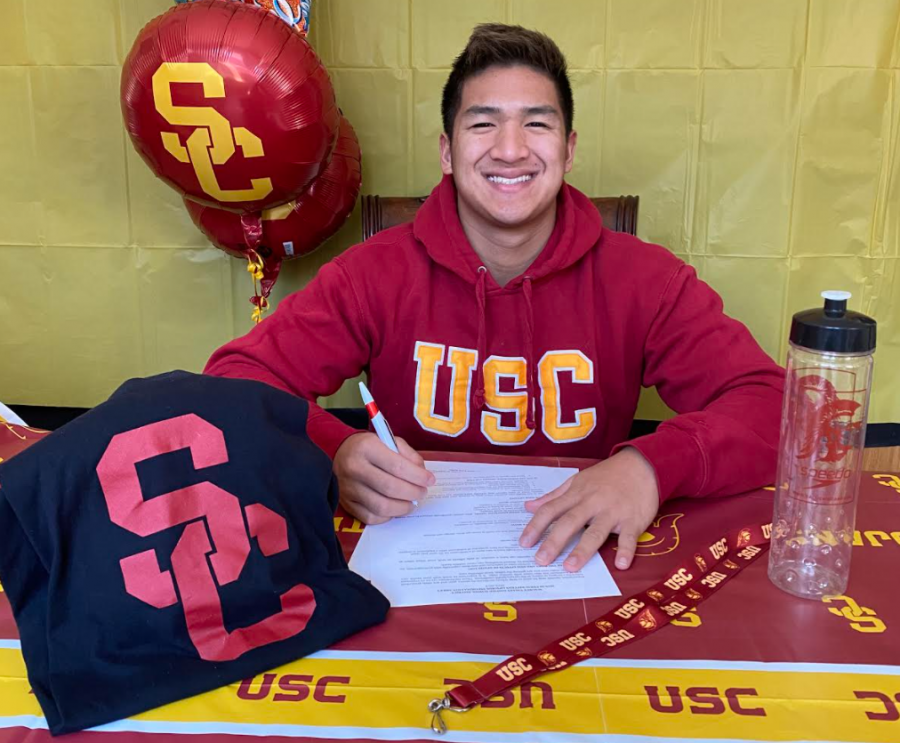 While most seniors are still waiting for their college decisions to be released, Diamond Bar High School senior Vincent Cheng has announced his commitment to USC as a part of their Division I swim team.

Cheng has been on the DBHS varsity swim team since his freshman year, competing in  all four styles of swim.  DBHS swim team coach Darlys Ankeny said Cheng’s strongest style in competition is butterfly.

“ [Cheng] is always willing to be put in whatever we need him to swim. I am confident if we have a season this year he will be adding his name to the record board in other strokes as well as lowering his back and butterfly record,” Ankeny said via email.

Despite having a great freshmen and sophomore year, Cheng said he recognizes that his high school swim career hasn’t been as fulfilling as he had hoped.

“For my high school career, it wasn’t much, since I did not get a junior year of swim and hopefully I’ll get a senior year,” Cheng said via Instagram.

Cheng said that one of the things he was most drawn to when looking at USC, was the dynamic of the school and the team. Cheng plans to focus his studies in the Chemistry Department and plans to take Chemical Engineering.

Cheng has been swimming for 10 years, and is currently training with Brea Aquatics. According to Ankeny, Cheng’s family had influenced him to become a swimmer.

“I was very excited to have the youngest Cheng,” Ankeny said.“I had the privilege of having his sister Tiffany my first years at Diamond Bar. Then Kelly after that.”

Cheng has also competed in many rigorous competitions throughout his swimming and high school career. Some of them include CIF Regionals, CIF State and Junior Nationals. He said  that his greatest personal achievements include qualifying for Junior Nationals and CIF competitions.

Over the years, Cheng has also been awarded the school titles of Most Valuable Player, Coaches Award and Record Breaker Award.

“[Vincent] is a regular player, but very much a leader by his personality,” Ankeny said.

Ankeny said that Cheng holds many strong qualities and characteristics which make him a standout athlete and leader. She said that he holds determination, persistence, and has an adventurous spirit that makes it fun to have him on the team.

“I hope that [others can learn from Cheng]; you can accomplish your dreams if you work hard with grit and determination every day,” Ankeny said. “Enjoy the journey to your dreams.”