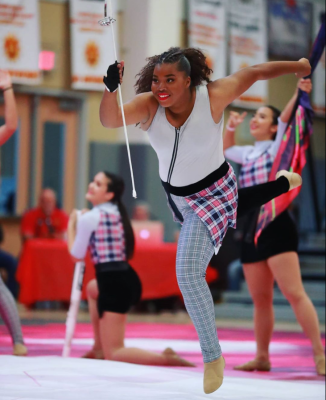 Despite having more newcomers than returnees, the Diamond Bar High School colorguard team is twirling into their winterguard season with nothing but grace and determination.

Though the team has just started its season, the varsity team has already secured first place in every competition with junior varsity and frosh teams consistently placing in the top three. At their most recent competition at Murrieta Mesa High School, the varsity teams scored 78.200 out of 100, showing an improving trend from earlier scores of 73 and 72.

The team’s winterguard season, however, has been cut short due to concerns over the COVID-19 pandemic.

Scored according to four categories, the winterguard season prompts each team to create a thematic choreography that’s evaluated on movement, equipment, general effect and design analysis. Each criteria is scored independently and added together to formulate the eventual score out of 100.

This year’s choreography is based on Johann Panchelbel’s Canon in D, a 17th Century composition that can regularly be heard in movies and is utilized in contemporary pop music. The set opens with the cologuard members happily performing to the music, however, as time progresses, the movements become more slack and relaxed, in show of how overused the song has become.

While the performance does include complicated usage of rifles and flags, senior captain Markella Simmons said that she believes that the team’s dedication and commitment is one of the major contributors to their success.

“My favorite part is seeing how much work they’re putting in and how much better they’re gonna get after,” Simmons said. “We’re already a lot better than we were last year.”

The hardest aspect of colorguard is that it is a year long activity, requiring members to perform during football season and compete throughout the winter season as well.

According to Simmons, the varsity teams train a minimum of six to eight hours a week with those numbers increased to 10 during the week before showcase. Junior varsity and frosh has a slightly lightened agenda with 3 to 4 hours a week, not including practice during the scheduled class periods.

The few who do stay on the team throughout their high school career, such as Simmons, stays, not only, for the tosses and spins but the overall atmosphere of the team.

“In color guard, you build more of a family,” Simmons said. “On other teams, you might have one person that you build a really good relationship with but that’s it.”

This familial aspect of the team has also been one of their main competitive edges, something varsity sophomore Kristin Joe attributes to her success.

“I’ve learned to go all the way and push for my best, especially since we’re all equal as a team and rely on each other to build one another up,” Joe said.

With everything she’s experienced in the last four years, especially her appointment as captain, Simmons hopes to leave a legacy in her final year.

“The thing that I have learned is to strive for progress not perfection,” Simmons said. “Honestly, if we had our show perfect, then our coach wrote us the wrong show since the point of the season is to progressively get better.”