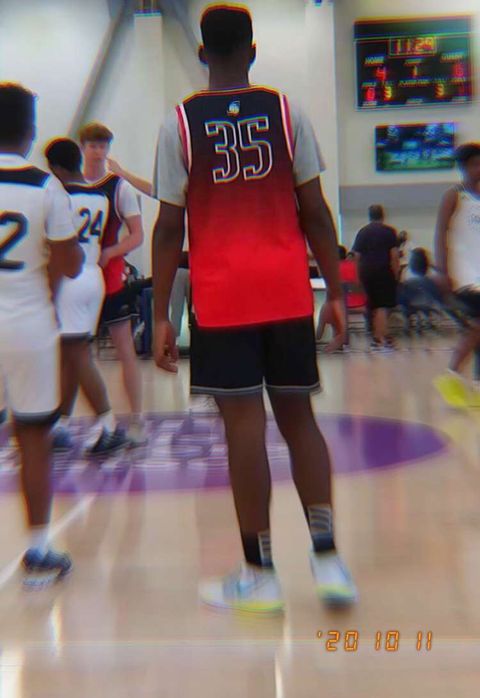 Malcolm Bell has been playing basketball since he was seven years old and to this day he still works with the same coach, Mike Clue.

“As a child I was part of Campus Basketball Elite which was coached and ran by Coach Mike and it was honestly amazing being a part of a team like that,” Bell said via Instagram.

The sophomore basketball player has recently enlisted in the Prodigy athletics team, which specializes in matching promising athletes to coaching scouts.

Prodigy is an Amateur Athletic Union team that travels the country to play in high level tournaments that are constantly being seen by college coaches and scouts. Its mission is to prepare athletes for the next level of basketball, whether it be college-level or NBA.

Training at Prodigy differs from training at school in the sense that all the athletes on the team were handpicked, allowing the coaches to give workouts at a higher intensity.

Bell says that he attributes most of his success in basketball to all of his coaches at Diamond Bar High school.

“Honestly all my coaches that I’ve had since I’ve started playing like Coach Mike Clue which is the freshman coach and Coach Henry [Frierson], Coach O [Omar Nasir], and Coach E [Eric Ingram] which are the varsity coaches helped improve my game and further grow my knowledge of the game,” Bell said via Instagram. “Especially Coach Mike, he’s been coaching me ever since I started playing when I was seven.”

In addition to basketball, Bell also plays football and baseball. However, his main focus is basketball because he has been playing it the longest.

Bell says that he is very grateful for the opportunities presented to him by DBHS basketball.

“I’ve been able to be seen by a couple coaches and have the opportunity to play with Prodigy which is such a good team with amazing coaches,” Bell said via Instagram. “Playing with them really opened my eyes to all the opportunities that are out there for me.”

Prodigy discovered Bell from the DBHS head basketball coach Henry Frierson. Coach Phillip Brown, from Prodigy, reached out to Henry to watch a few games that Bell was playing in.

At the culmination of his freshman season, Bell was selected for  the 1st Team All-League award for varsity, a rare achievement for a freshman.

“I’m so proud of myself for earning that reward but also at the same time, it doesn’t mean much to me because there’s still work to be done, it’s only the beginning,” Bell said via Instagram.

Bell said that he is also grateful for his parents, who he says are his inspiration in the sport.

“Their constant support for me means so much and it just keeps me going,” Bell said via Instagram.

Bell emphasizes the importance of having a good work ethic and consistent morale.

“You always have to be getting better, stronger, just ready to go out there and compete and not just with the other team but your teammates as well,” Bell said. “My goals are to play at a D1 college, hopefully UCLA, but my ultimate goal is to eventually be able to declare for the NBA draft.”

To keep fit during the pandemic, Bell has been privately training at Clue’s club gym in Chino. He has also been practicing and going to tournaments with Prodigy and coach Brown.

Bell says that he continues to work toward his goals each day at practice, one slam dunk at a time.