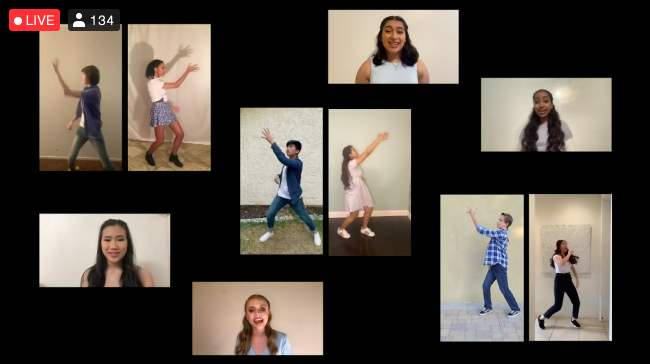 Due to social distancing guidelines, the Diamond Bar High School choir department had to take a virtual approach to their most recent performance, appropriately titled “Social Distance.” The show was a Twitch-broadcasted mix of live and pre-recorded performances.

My biggest gripe with the performance was the technical issues I faced throughout; the show was supposed to start at 7 p.m. but was pushed to 7:30 p.m. due to microphone issues. There were also short periods of time where the audio would cut out, both during solos and announcements between performances. While these did not ruin the experience, they did take away from the overall immersion of the performance.

Despite these technical issues, the performances themselves were quite impressive: the audio quality was high so it sounded very similar to an in-person concert. The group performances were pre-recorded and included plenty of unique choreography.

There was much creativity in the layouts of the performers’ individual cameras that mimicked positioning in a traditional performance. In order to make sure that all performers were shown, there were multiple screens with different sets of performers. The switching between screens was fast and well-integrated into the songs and performances, making them dynamic and interesting.

One performance that really embraced these dynamic screen switches was “Africa” by Toto, which felt almost as if all the dancers were performing together on one stage. With interesting choreography and polished vocals, it was my favorite performance.

The solos were also excellent, with some soloists even dressing up for their performances. “Fly Me To The Moon,” sung by soloist Aeron McCoy, especially stood out. McCoy’s voice fit the song perfectly, and she wore an outfit to fit the theme. Unfortunately, some soloists did have short microphone cuts during their solos, which interrupted their performances.

The first virtual performance at DBHS may have had some technical difficulties, but despite these issues, much of what was done, despite these limitations, was impressive. The show had a lot of charm in the workarounds that were used to make it feel closer to an in-person performance.