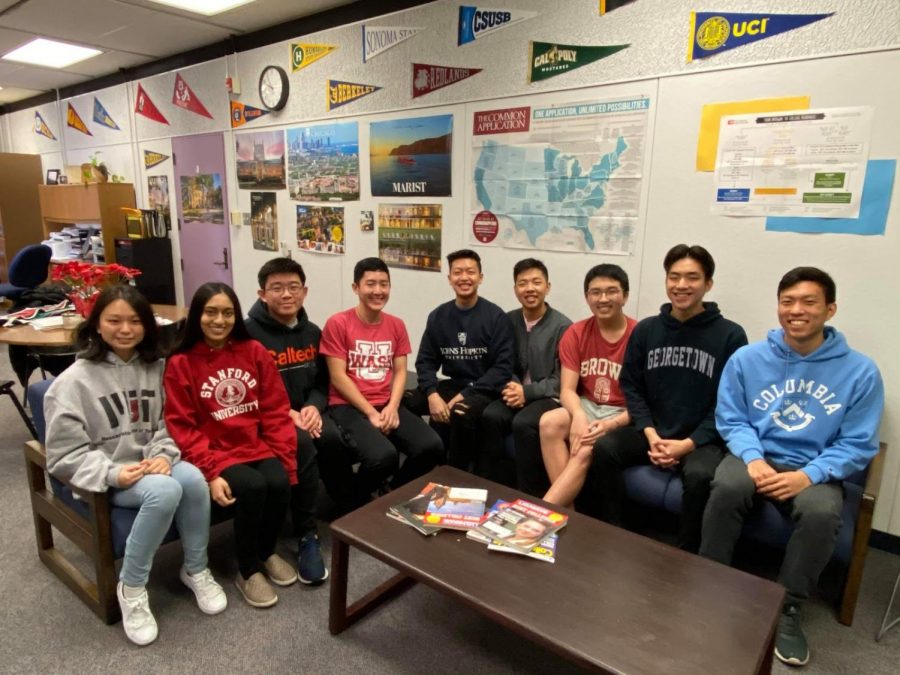 A life-altering letter. A spontaneous phone call. A congratulatory email.

As four grueling years of high school come to an end and early admission notices are sent back to expectant students and their families, at least 10 Diamond Bar High School seniors have already received acceptances into prestigious colleges this year.

Among the students are Mena Hassan, who was accepted to Stanford, Mason Pan and Jolynn Zhang to Brown, Christopher Lee to Columbia, Sean Chang and Jay Siri to California Institute of Technology, Lawrence Wang to Johns Hopkins, Ryan Lou to Georgetown, Brandon Zhou to Washington University and Catherine Lu to both CalTech and MIT.

Lee, who applied for early decision as a psychology major, was initially drawn to Columbia due to its location in New York and was also attracted to its core curriculum and history.

Attributing his success to the honesty he exhibited in his essays, Lee was frank when addressing his flaws and failures, using them to his advantage to showcase the crucial roles they played in cultivating his triumphs.

“If I had to choose one thing [that made me stand out], it’d be how my application told a unique story,” Lee said. “My essays weren’t written with the aim of perfection or quality; they were written to show exactly what I stood for, who I was, and why I did what I did.”

Meanwhile, Zhou, Siri and Lou credited their achievements to their extracurricular activities and the unique opportunities each experienced.

Zhou, who wants to major in general biology, participated in badminton and won many accolades throughout high school.

“I think [the internship] really showed my passion for STEM and my drive to seek out opportunities rather than waiting for them to come to me,” Siri said.

Lou said he believes his engagement in various competitive campus activities was the main catalyst for his acceptance.

Through his participation in Mock Trial and Science Olympiad, Lou was able to display his passion for both the humanities and the sciences.

“I chose to apply to Georgetown University because of its numerous perks,” Lou said. “Since I want to study political science, Georgetown’s location in Washington, D.C. could not be more perfect, allowing me to easily find research or internship opportunities.”

Despite being undeclared at the moment, Lou combined his interests in science and politics, considering to continue his education in international politics at the Walsh School of Foreign Service.

“I have always been super passionate about influencing policy, especially environmental, and to be able to learn to accomplish such goals on a global scale through the Walsh School is a dream come true,” Lou said.

Stating the initial appeal for Stanford as its beautiful campus, weather, and close proximity to Silicon Valley, Hassan, who wanted to attend the school ever since her freshman year, was also greatly influenced by the professors and top tier academic resources offered at the university.

She intends to major in computer science while also studying public policy, political science and economics.

Hassan was beyond ecstatic when she found out the results of her admission.

“The results came out at 4 p.m. on Friday and I was volunteering that day when I gave my parents my portal login because they wanted to check [first],” Hassan said. “Then, a minute or two after, my mom comes running into the place where I was volunteering and she starts screaming and hugging me, telling me that I got in. When I got home, I hugged my parents and called some friends and watched some Stanford videos that I was keeping myself from watching before so I wouldn’t be too sad if I didn’t get in.”

Urging juniors to avoid procrastination and begin preparing their college applications in advance, all 10 seniors emphasize authenticity and passion as means for success.

“Find something you like to do,” Lee said. “Be your own person. Find yourself. Put your best effort into everything you do. If you really want something, nothing can stop you.”